Equipped with a backpack, a camera and a skateboard, I embarked from the Kuala Lumpur International Airport with 15 hours until my next flight. This extensive layover was the result of buying a budget airline ticket from China to Australia. 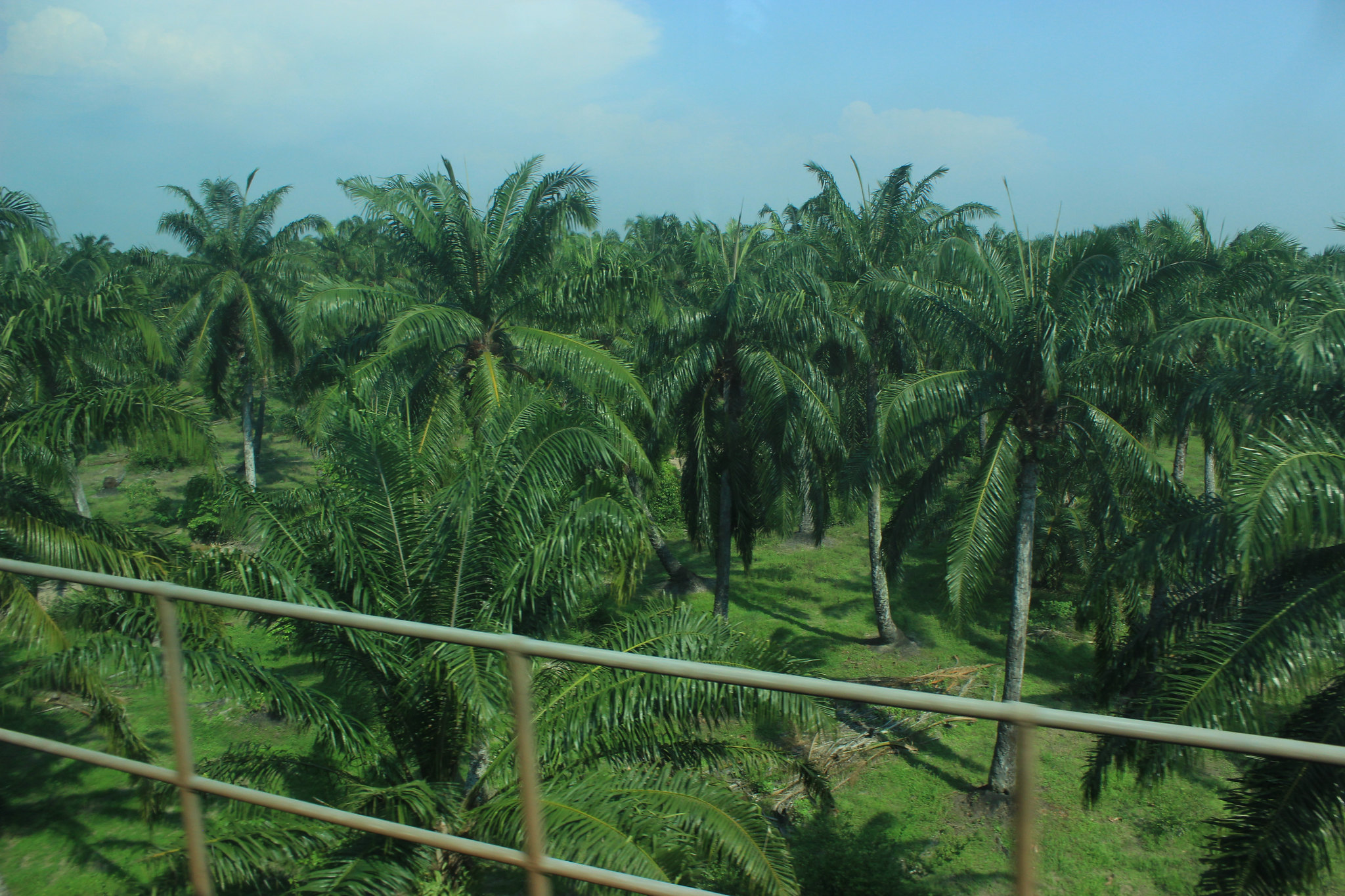 On the train from the airport, I passed through thick vegetation that slowly gave way to the sprawling Malaysian city of Kuala Lumpur. I had a few ideas as to what I wanted to see while in KL, but I lacked cellphone and internet services. My only guide was a few screenshot from Google Maps and my own intuition. 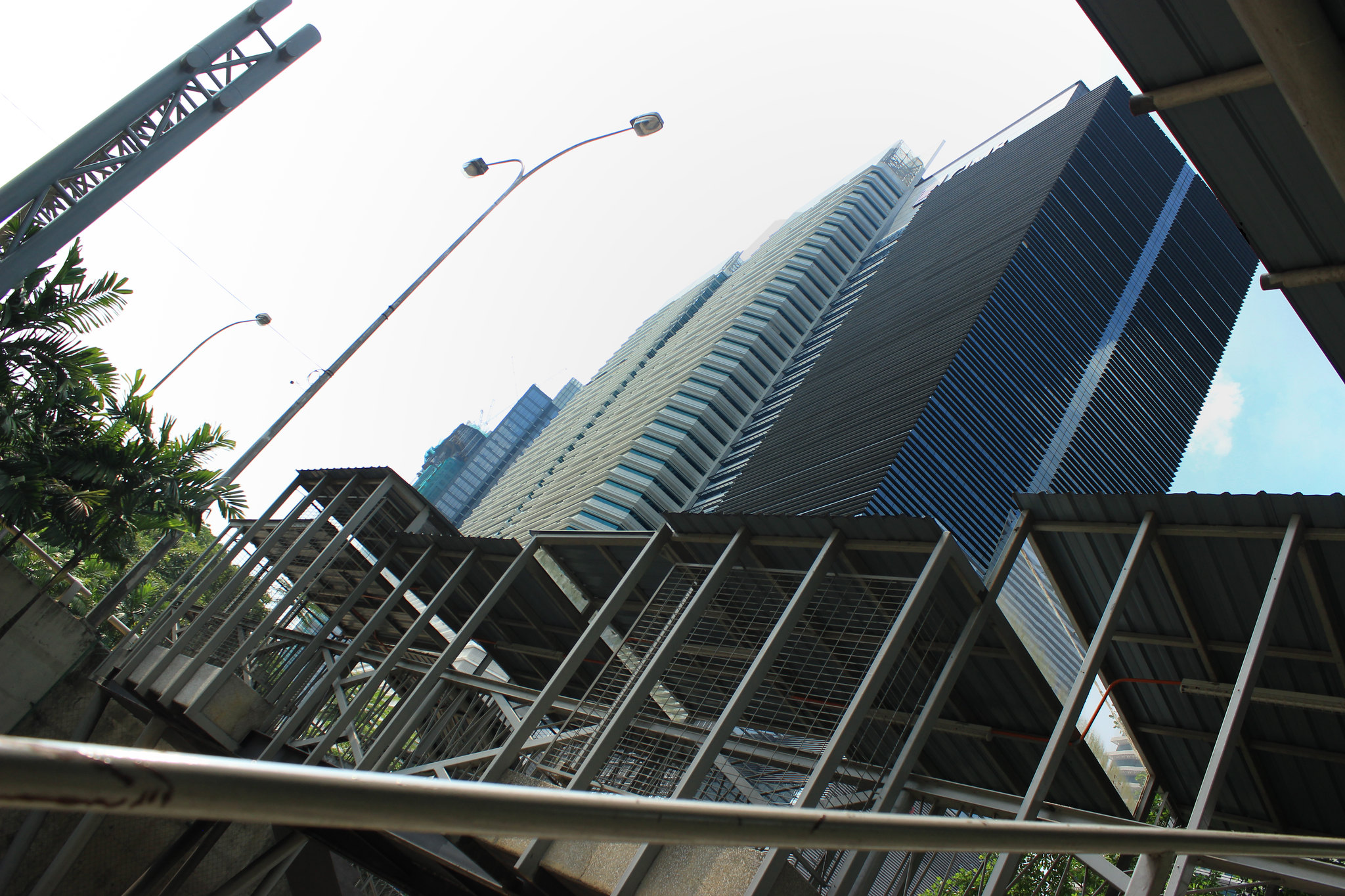 My disorientation began as soon as I stepped outside of the KL central train station. Skyscrapers surrounded me and served as landmarks. I would later use tall buildings such as the KL Tower and the Petronas Towers to direct myself towards the city center. 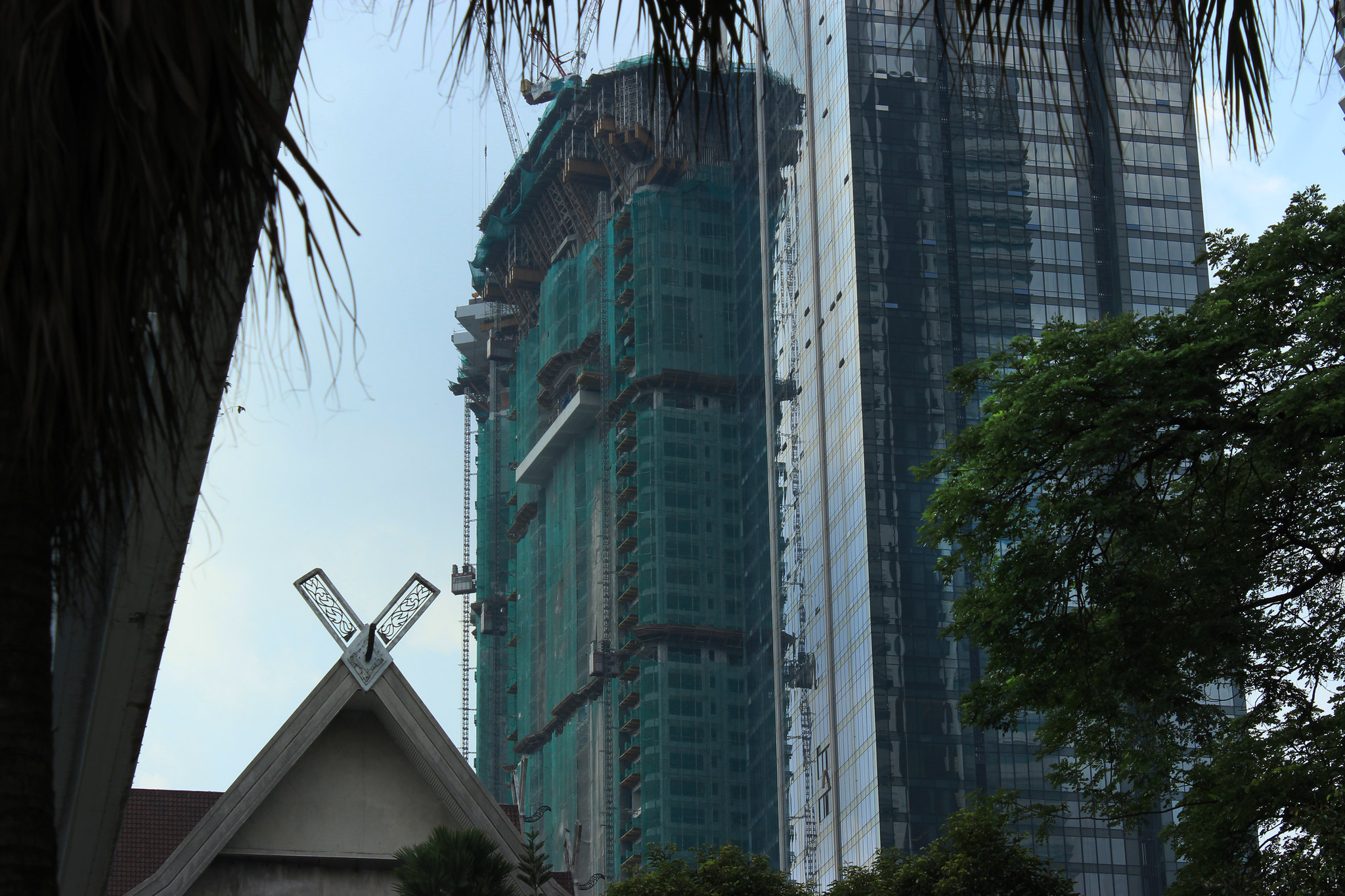 Massive construction projects like this one added to the already cluttered skyline of KL. 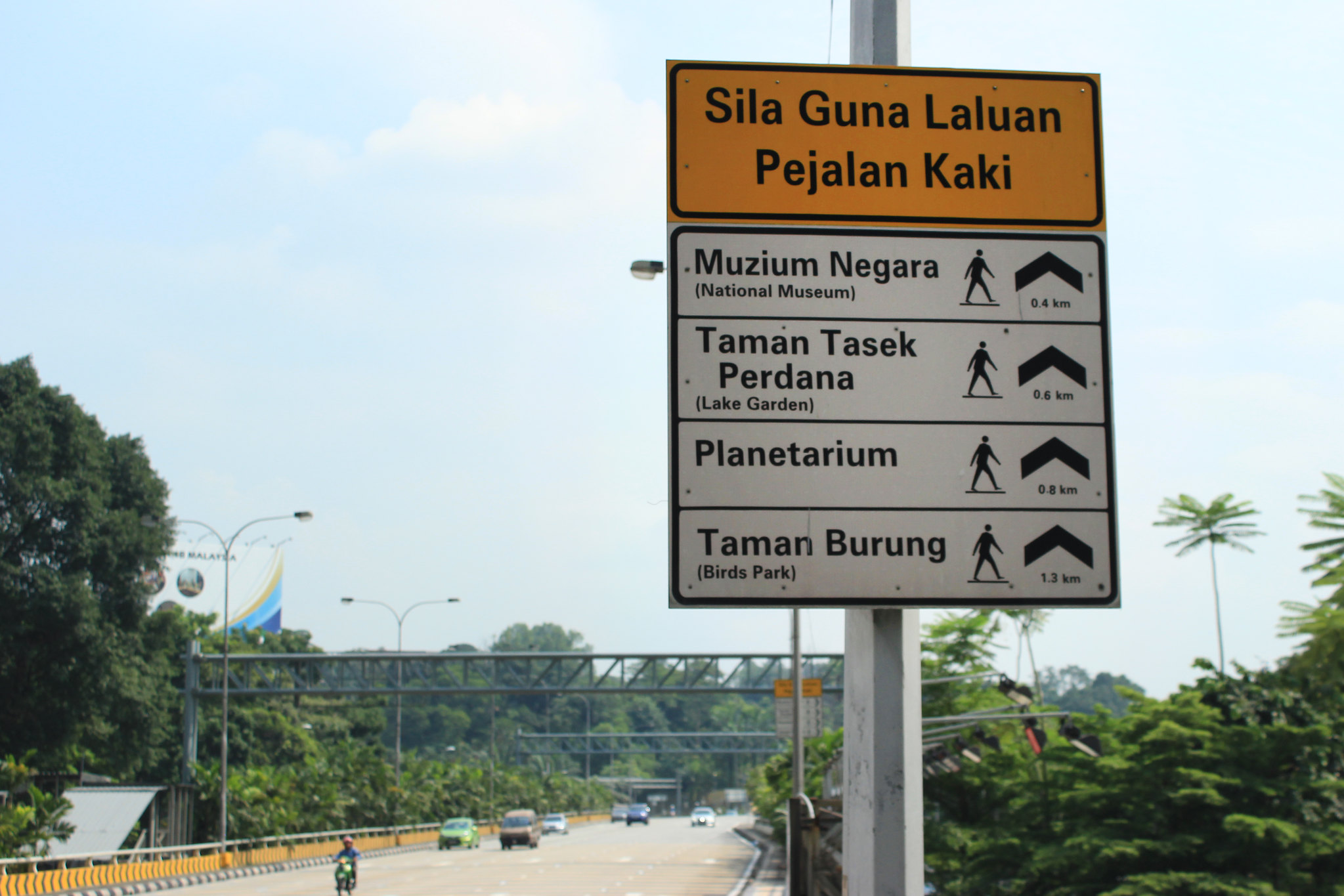 After asking several residents and following a questionable sidewalk, I finally found a sign that directed me towards the first destination I had planned on visiting, the KL Bird Park and Botanical Garden 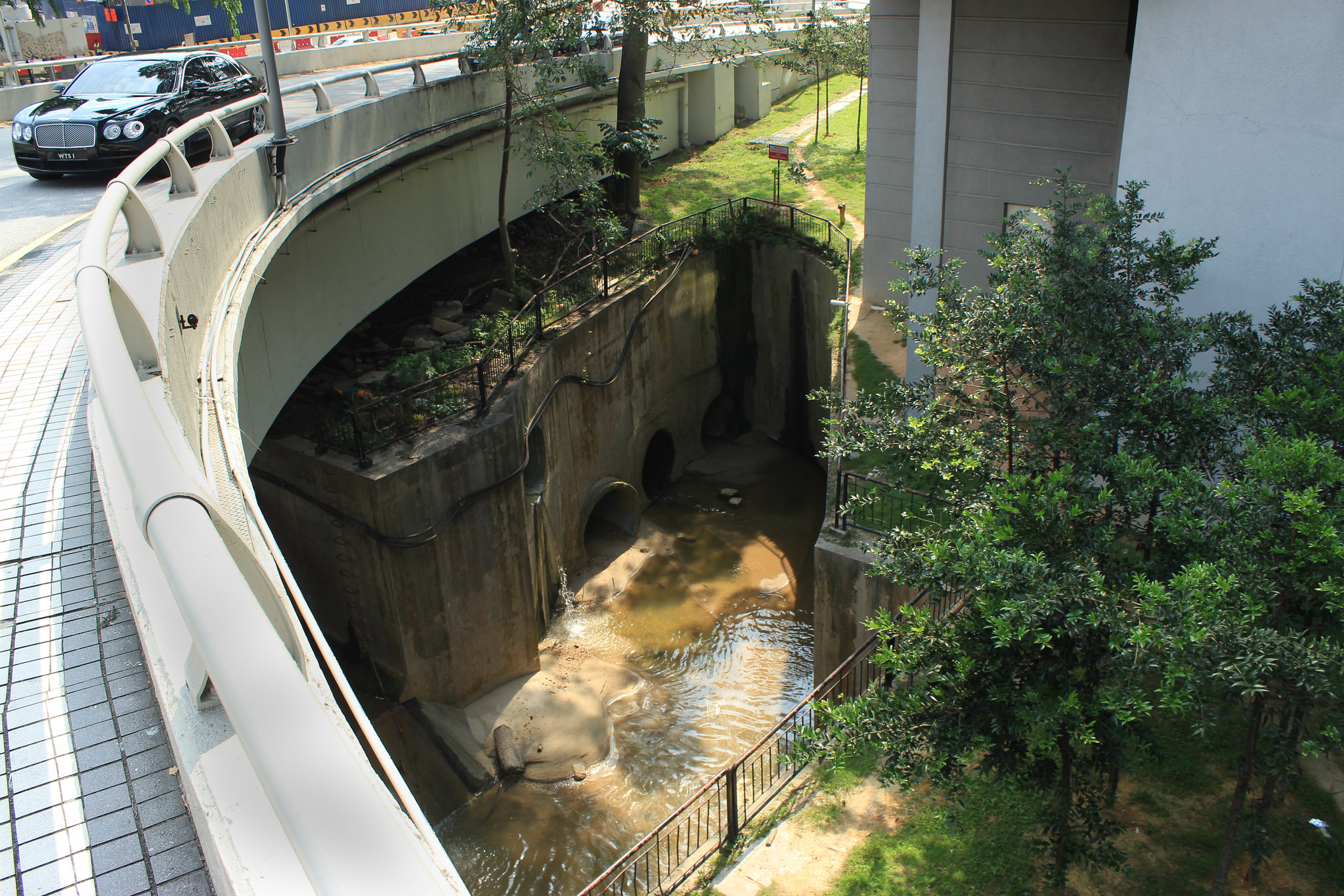 Despite the signs giving direction in English, I still managed to take several wrong turns and even ended up down in this ditch at one point looking for the right walking path. 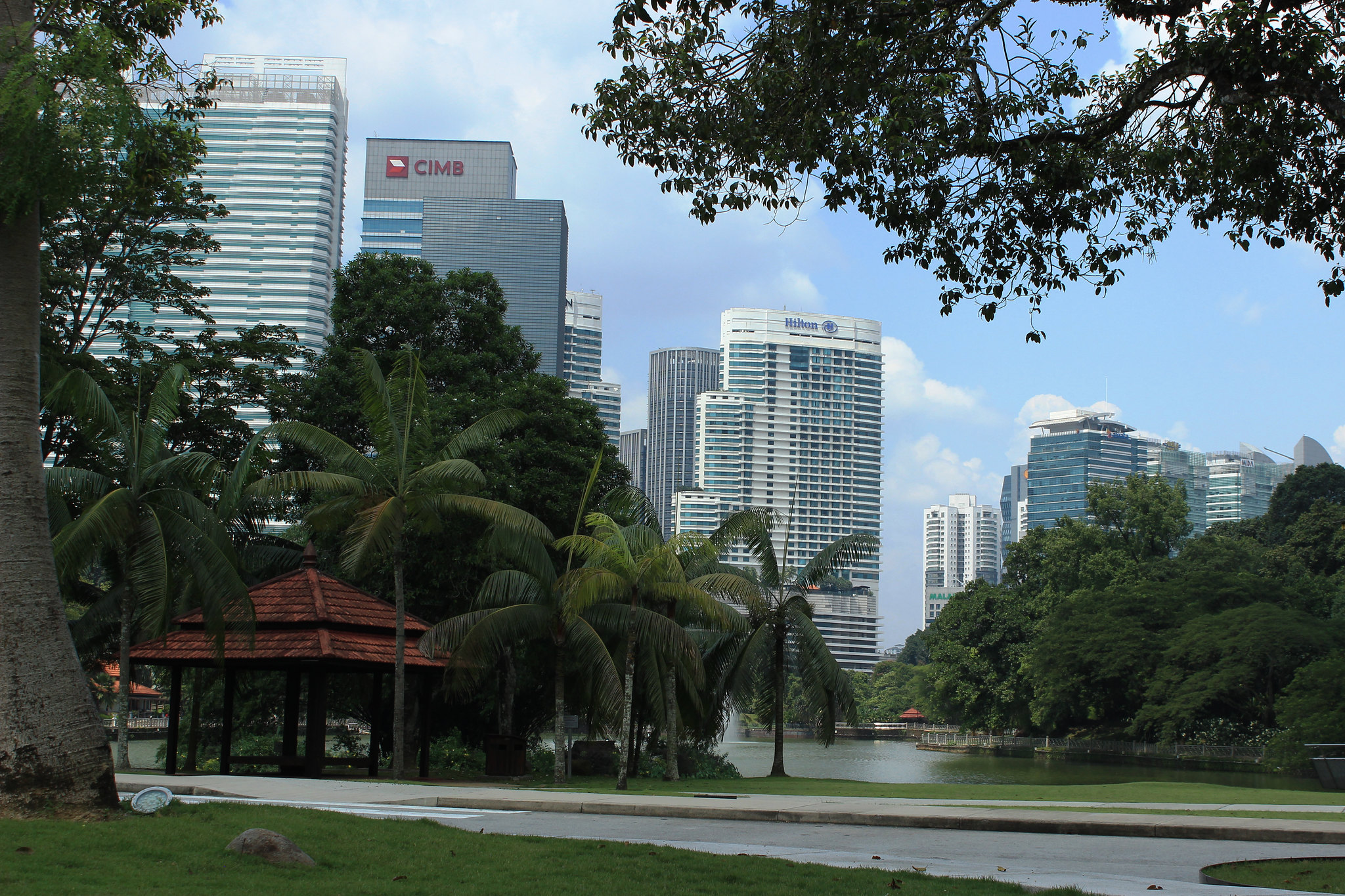 Once I finally reached the park, I sat down under a ramada and assembled my skateboard. During this time, I talked to a few construction workers who were on a break. One of them had even a small blanket stashed in the rafters of the shade structure. I guess I had intruded into their hangout zone but they didn’t seem to mind. Like almost everyone else I met in KL, they spoke a passable amount of English and were excited to interact with me. They were especially interested in my skateboard. 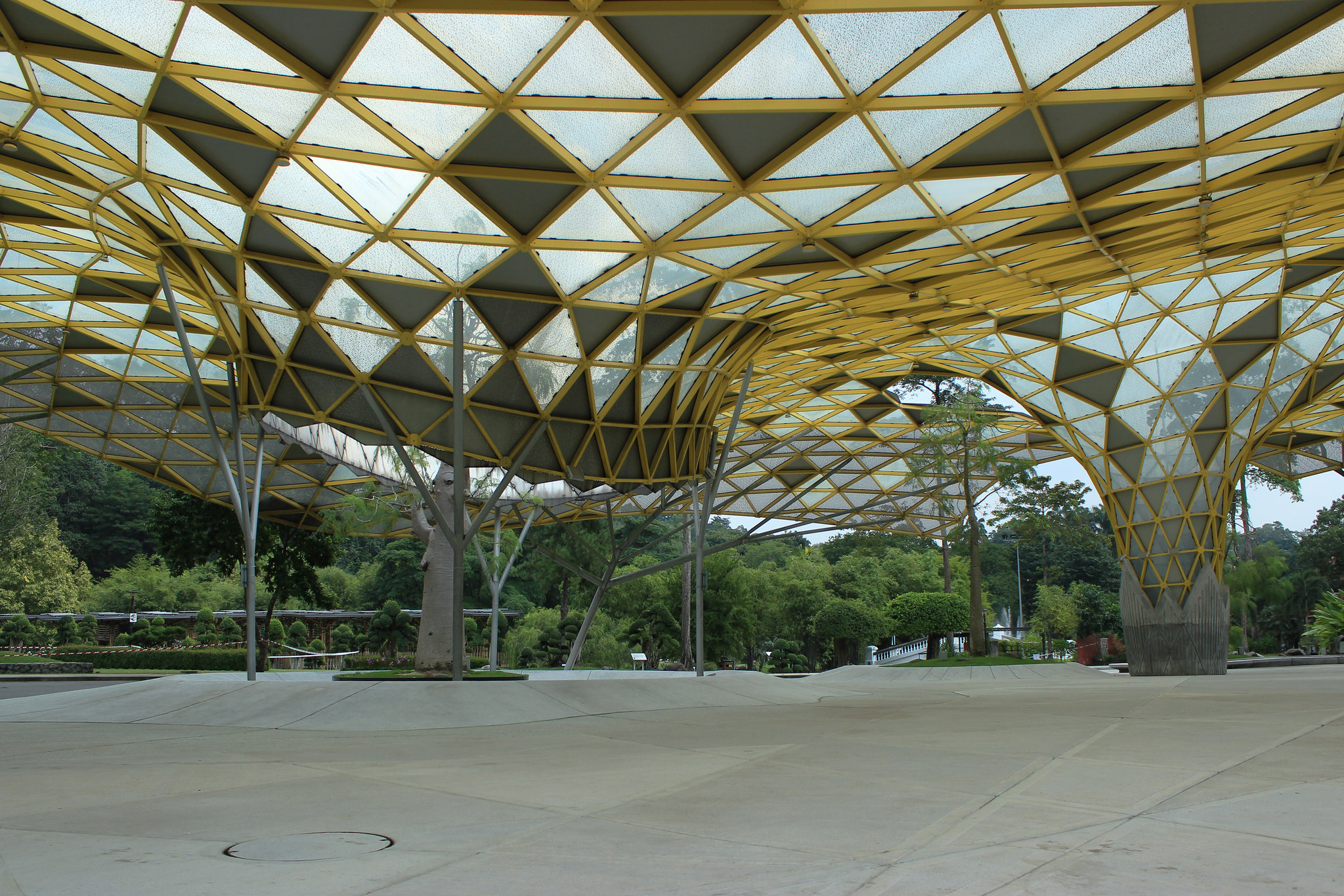 Speaking of skateboarding, I was amazed at what I found next. A giant shade structure with free wifi sat in the middle of the park. This plaza was basically a skate park, with tons of ledges and concrete slopes to do tricks on. I was ecstatic. It was however, also 102 degrees Fahrenheit and extremely humid so my excitement came at a cost. 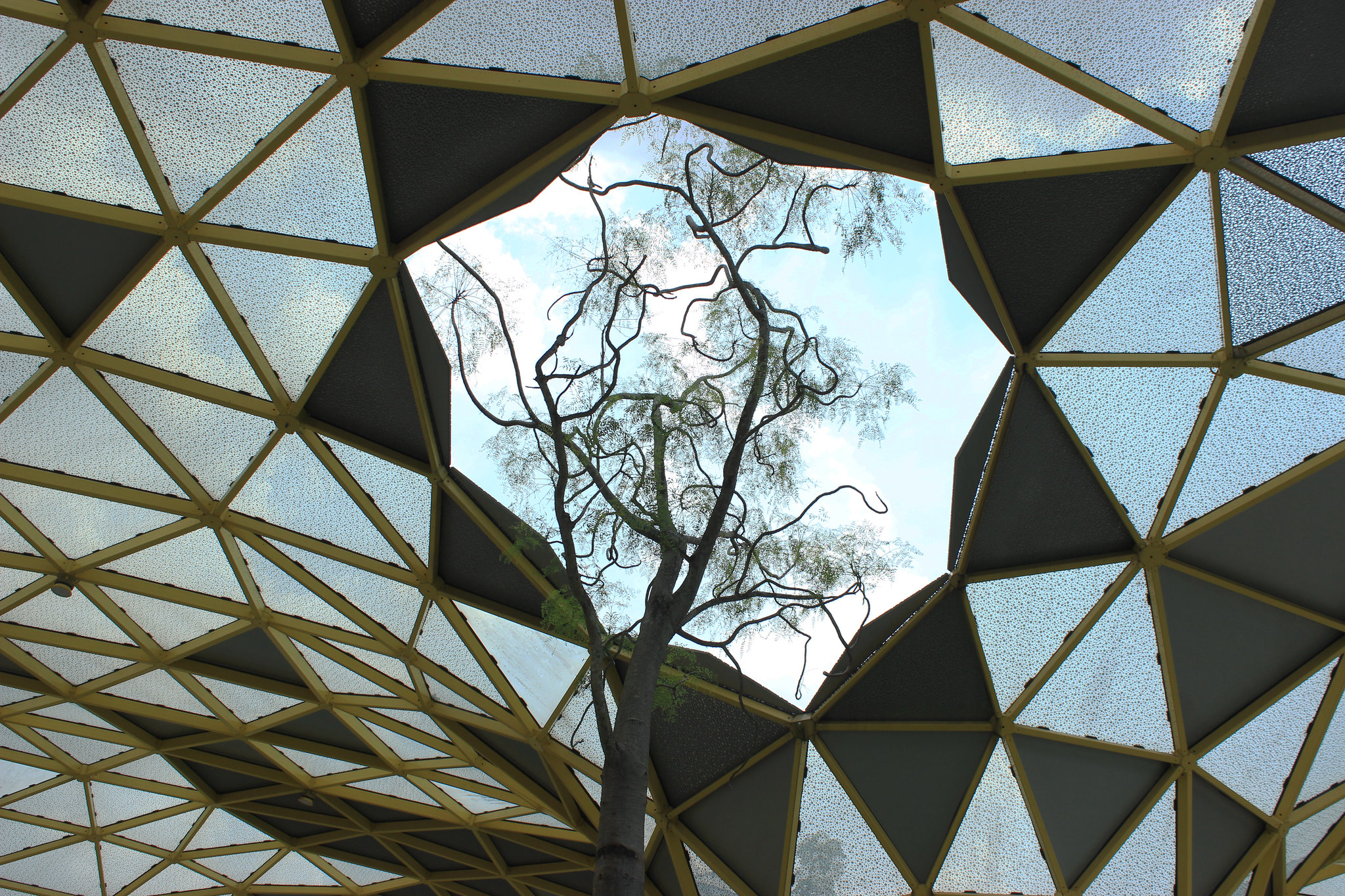 As I sat under this structure, attempting to cool down, I used the wifi to get my bearings. I set my sights on getting to the KL Tower which was a few kilometers away. 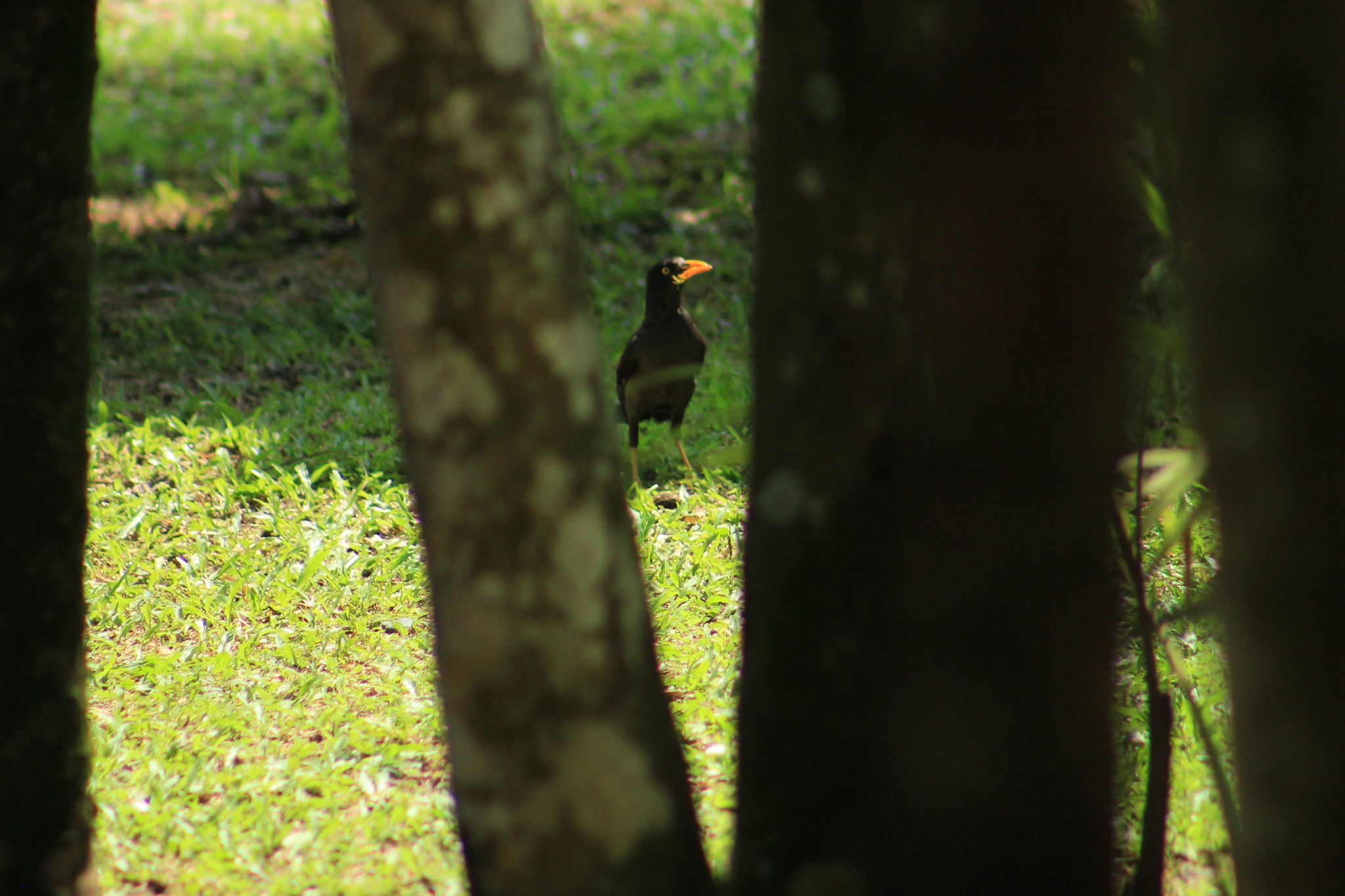 As I walked through the botanical gardens, I spotted tons of Animals. I was fascinated by these tropical birds, having grown up in the desert. 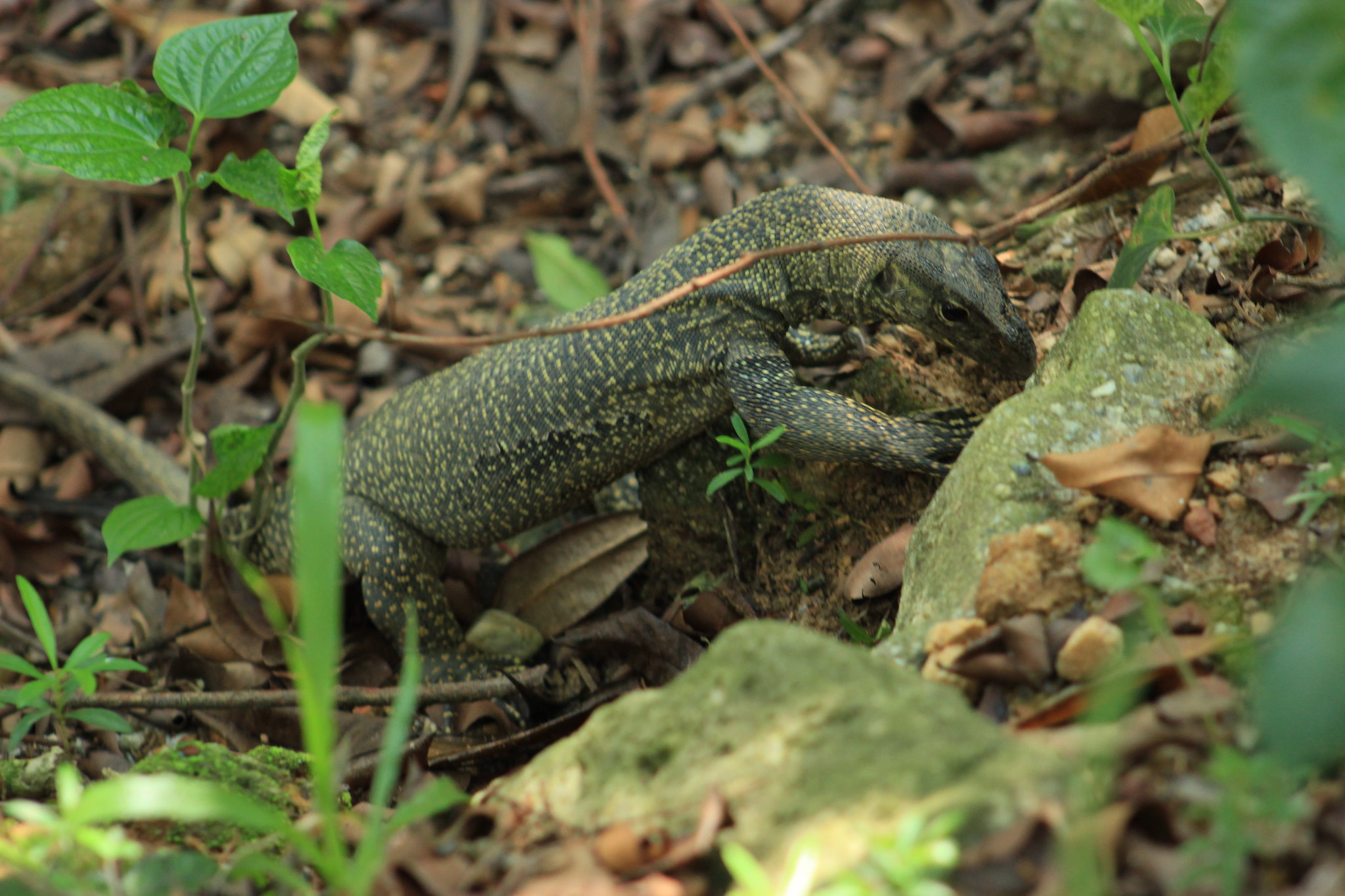 I also nearly stepped on this giant monitor lizard on accident. I’m sure that it scared me much more then I scared it. 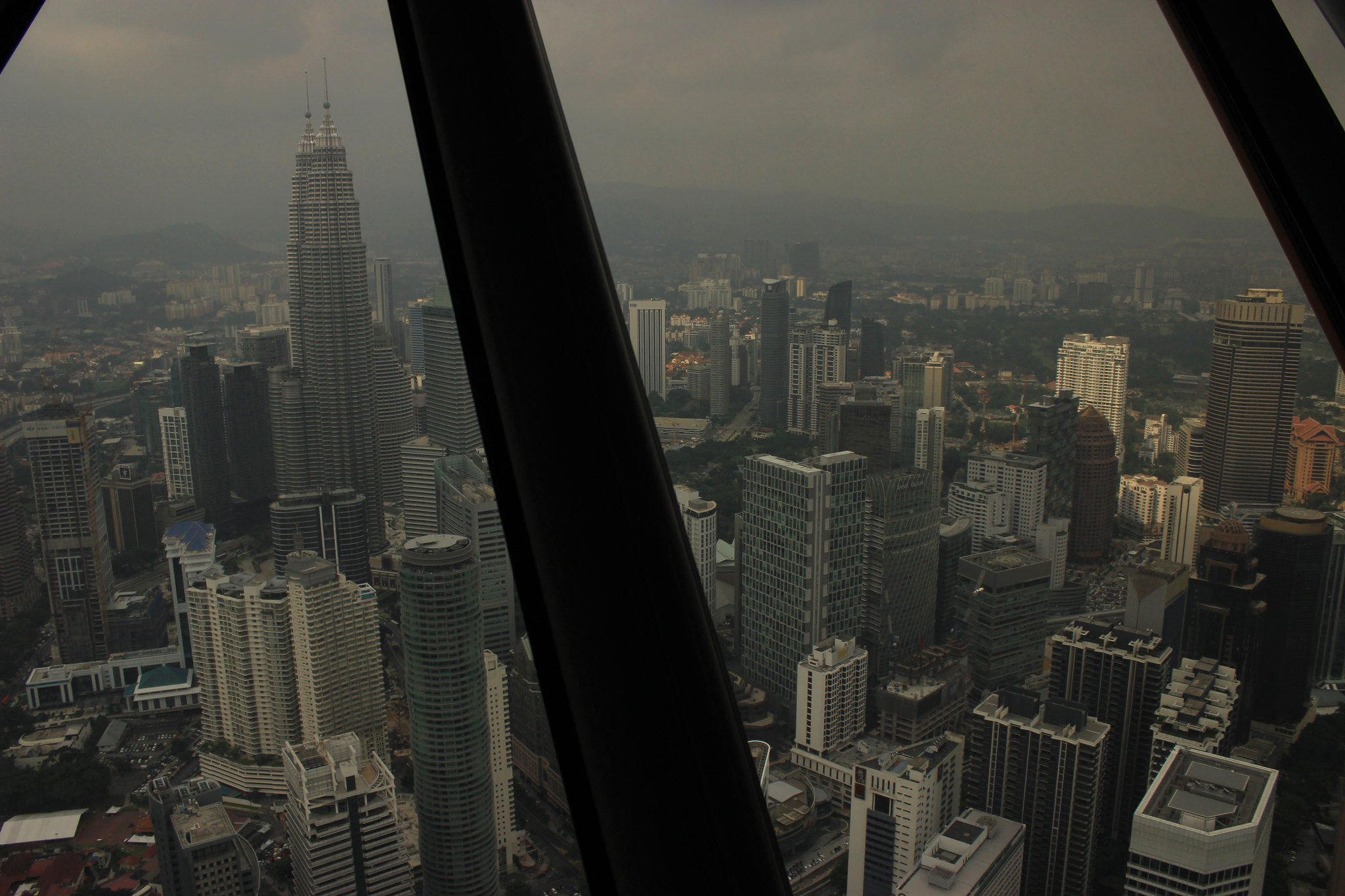 After a long trek that included searching for a bank that accepts Visa and buying some much needed water, I finally made it to the KL tower. For about 60 Ringgits or $12 US, I was able to go up to the second highest level and get a 360 view of the city. From this viewpoint you can really see how sprawling this city is. I was able to visually map out where I started and where I still wanted to go from up in the tower. 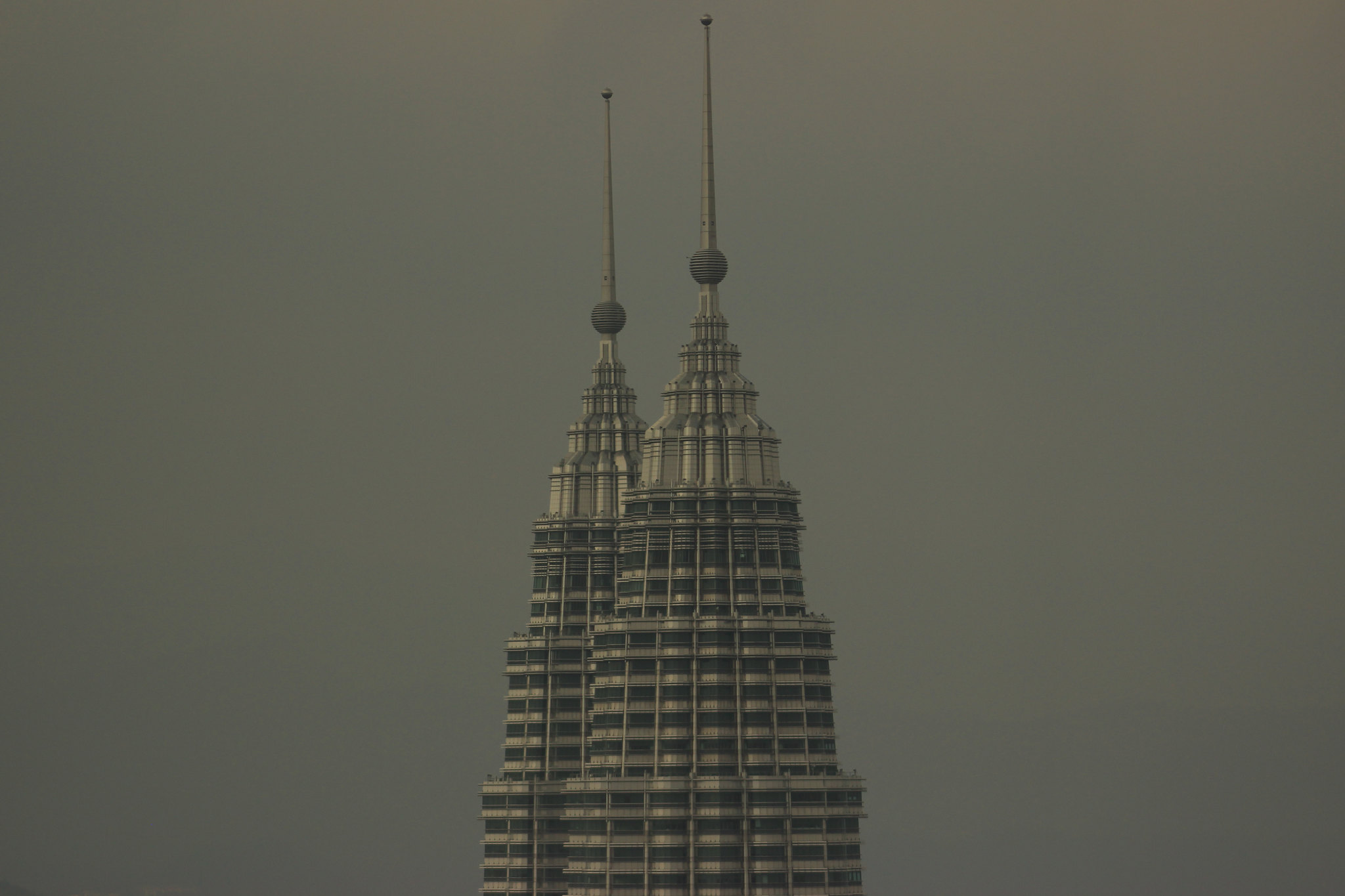 My next destination was the Petronas towers, which demand attention when looking out from the KL Tower. These towers are currently the tallest twin towers in the World. 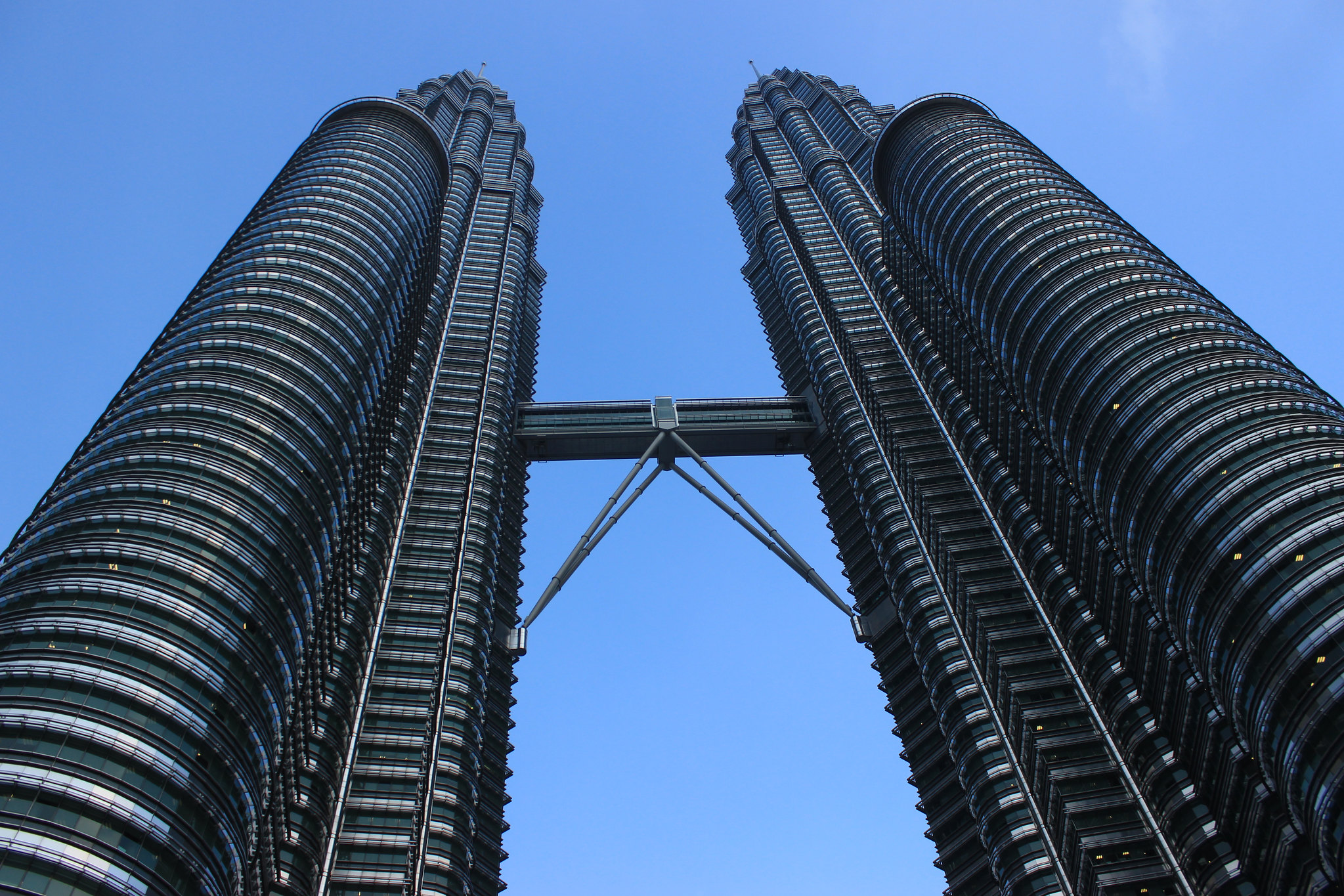 I decided not to go up into the Petronas towers because the view would likely have been redundant of the view in the KL tower, but even from below, the towers are worth checking out. 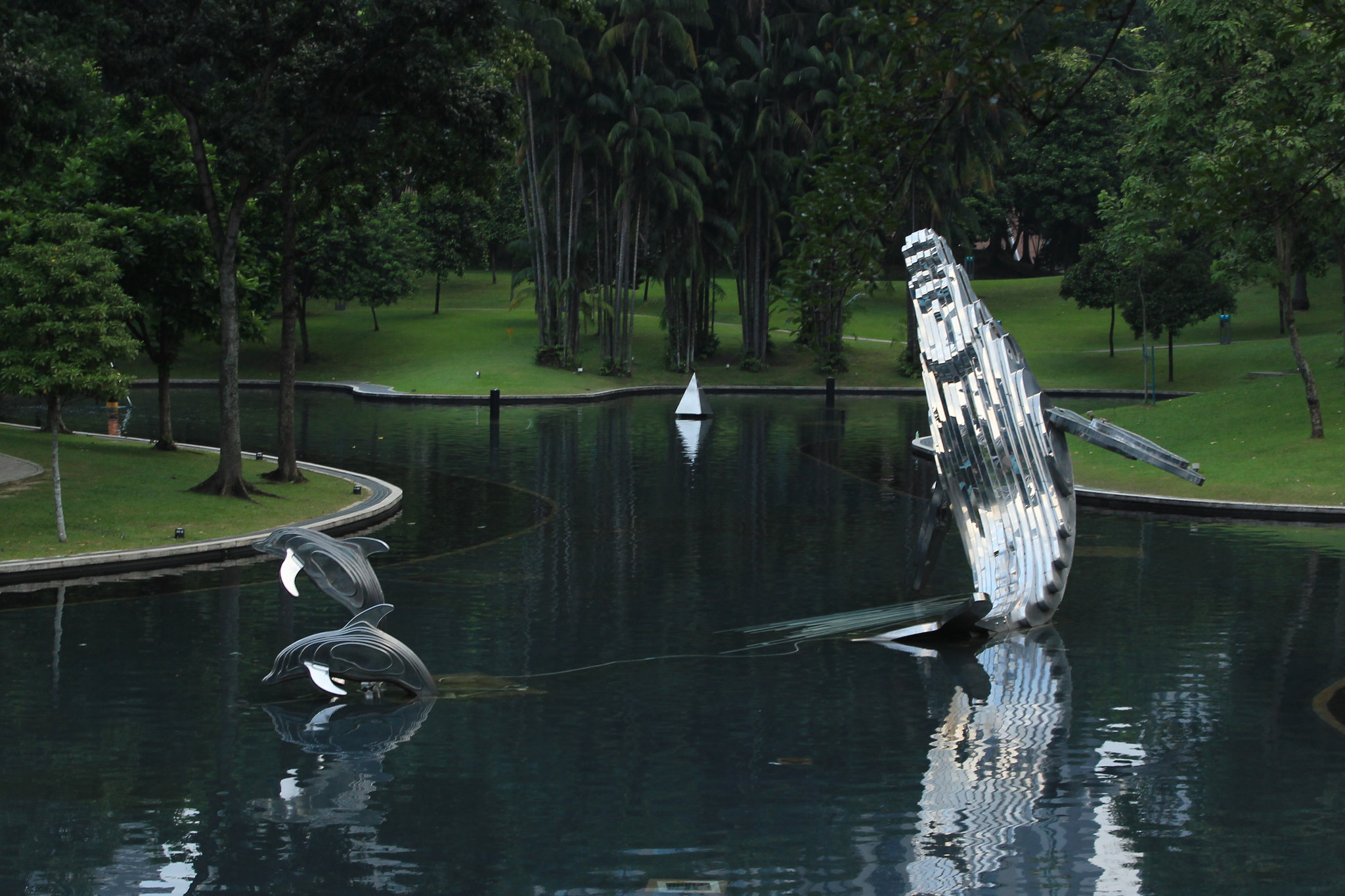 Behind the towers sits the KL City Centre Park, a massive park with a public splash pool, ponds and playgrounds among other things. This is a great spot to sit down a rest for a few minutes. 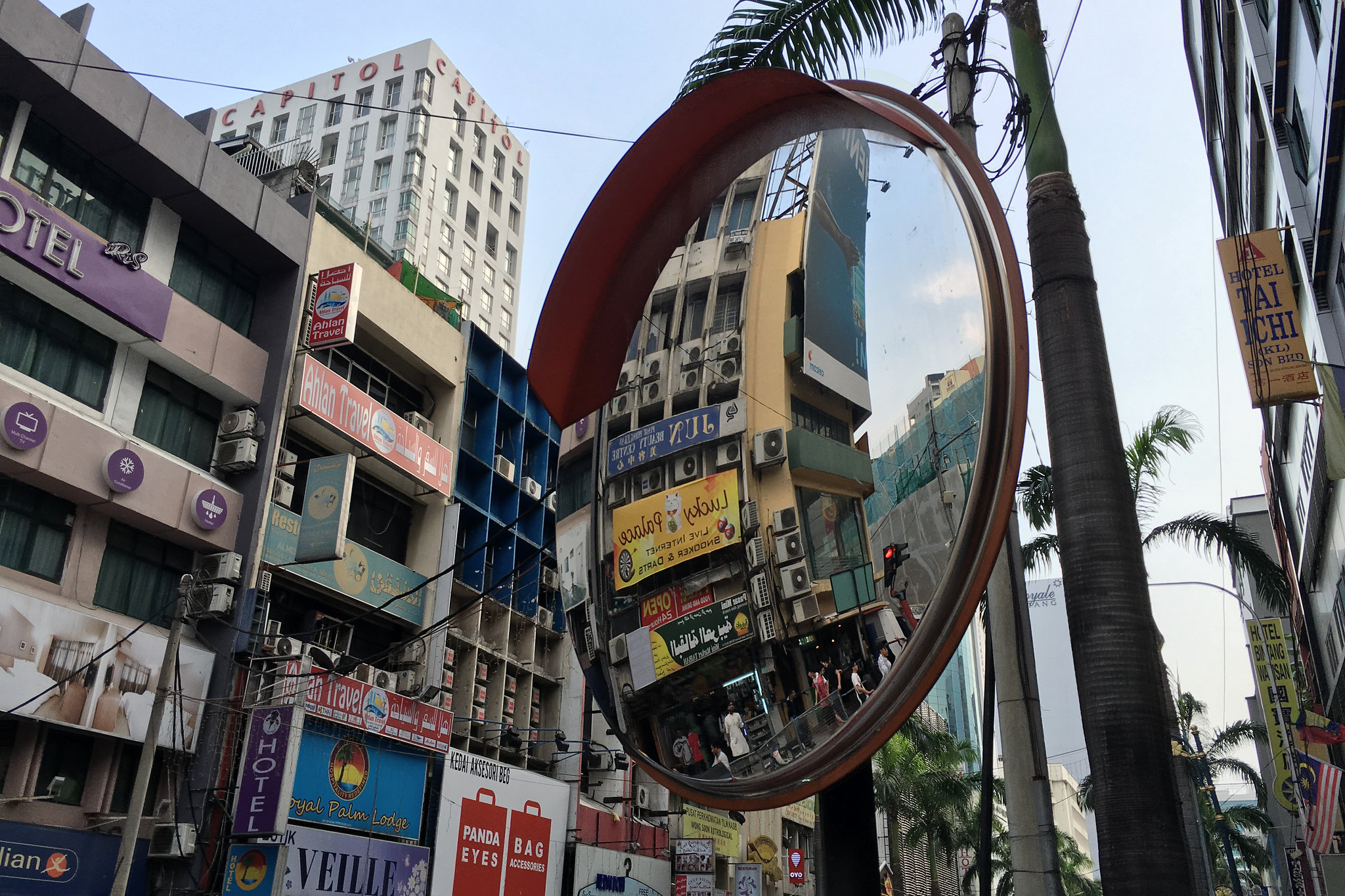 After leaving the City Centre, I made my way towards a massive shopping mall called Central Park. Due to my lack of directions, I took the very scenic route. As I worked my way down the cluttered streets in the direction of the mall, I found tons of awesome street vendors, one of whom gave me an delicious mango and ice drink in a plastic bag for free. 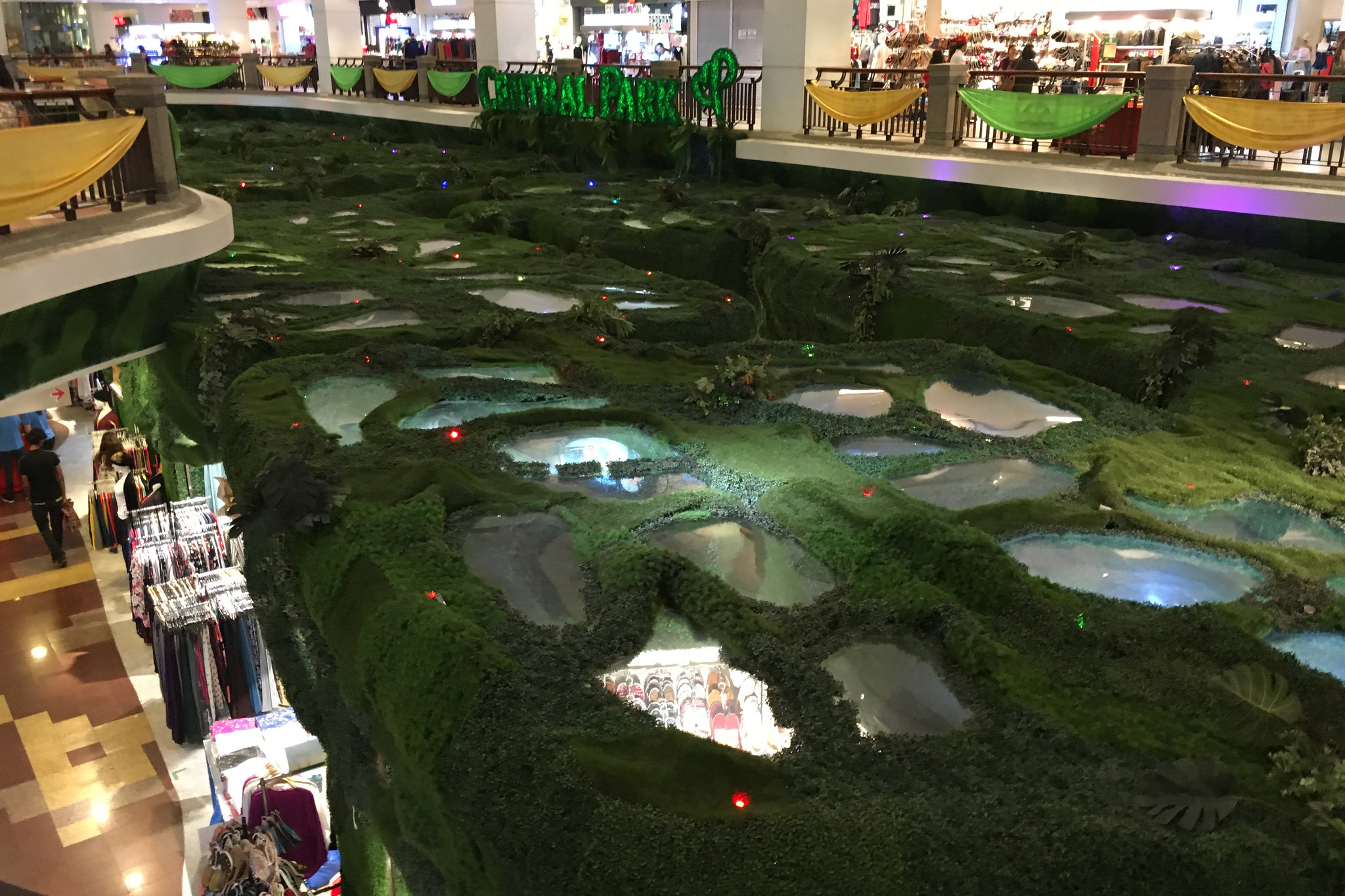 Once inside of Times Square, I was blow away at the sheer number of stores in the mall. Anything you could ever want was here, assuming you could find it. 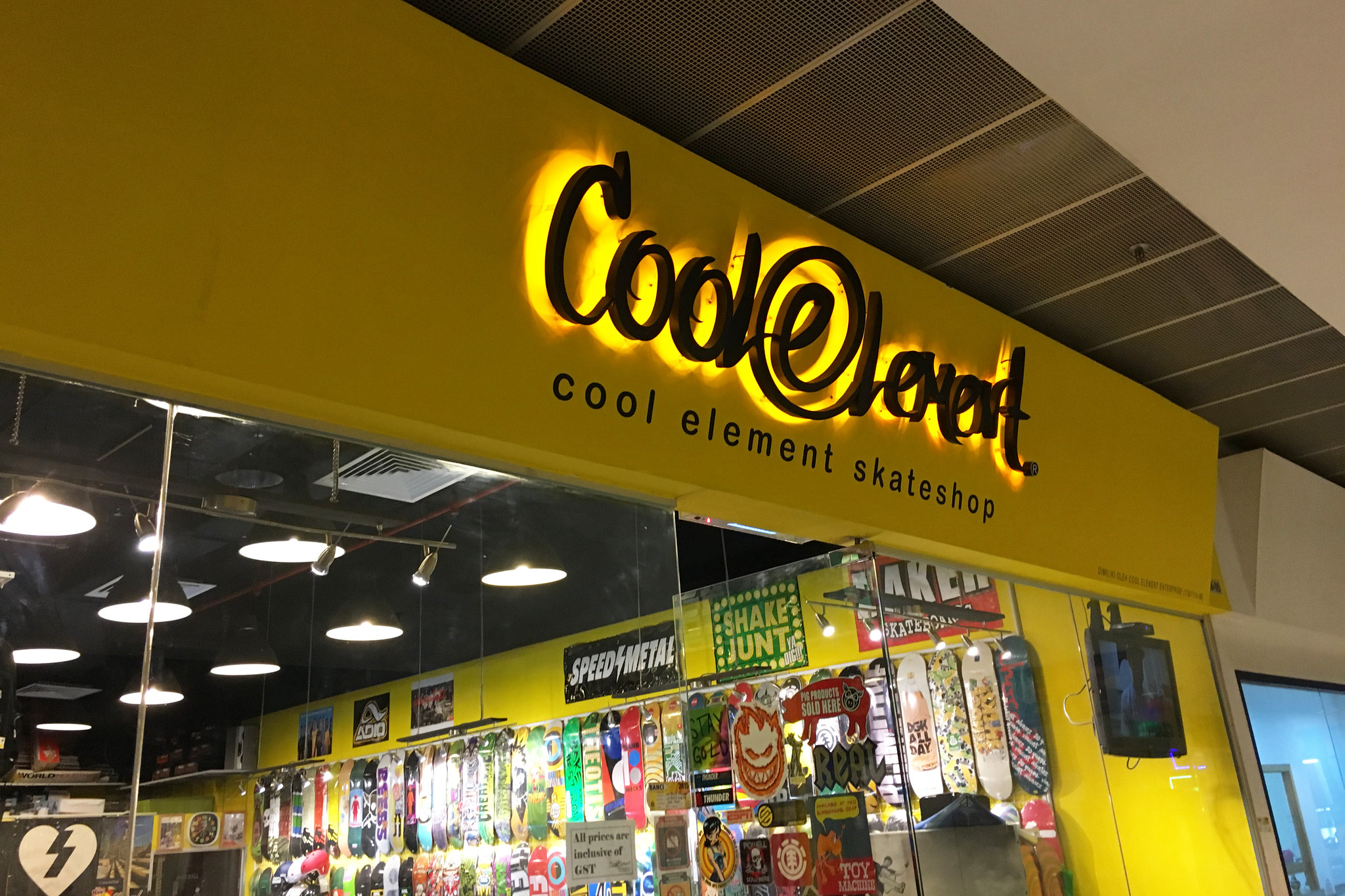 My original purpose for visiting this mall was to check out a Malaysian skate shop. Once I finally found this store, the guys inside were super nice and gave me some pointers as to where I should skate in KL. 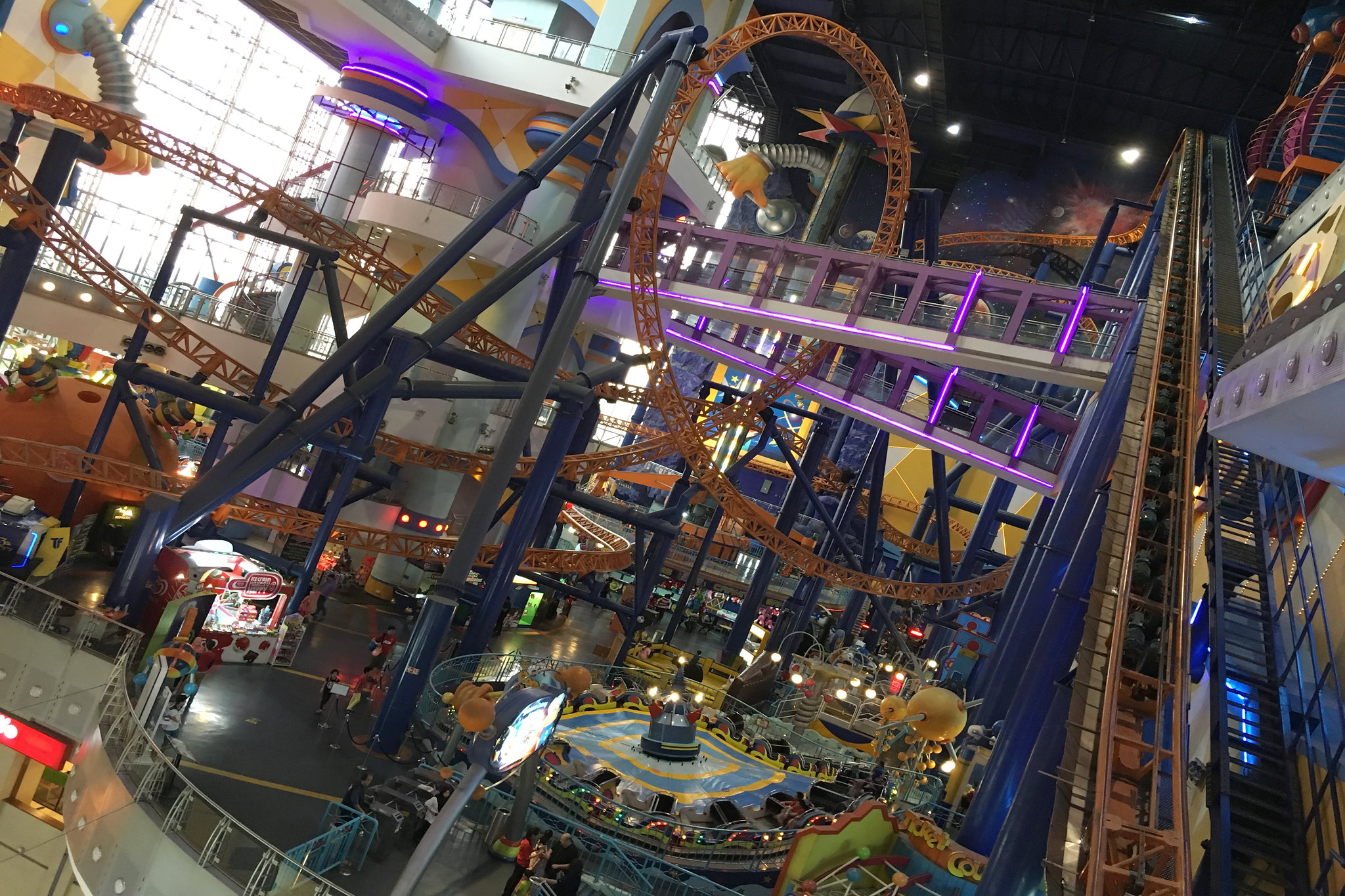 It was when I walked into the back section of the mall that I was totally flabbergasted. Times Square Theme Park is the largest indoor theme park in Malaysia and I had no idea it even existed until I walked into it. 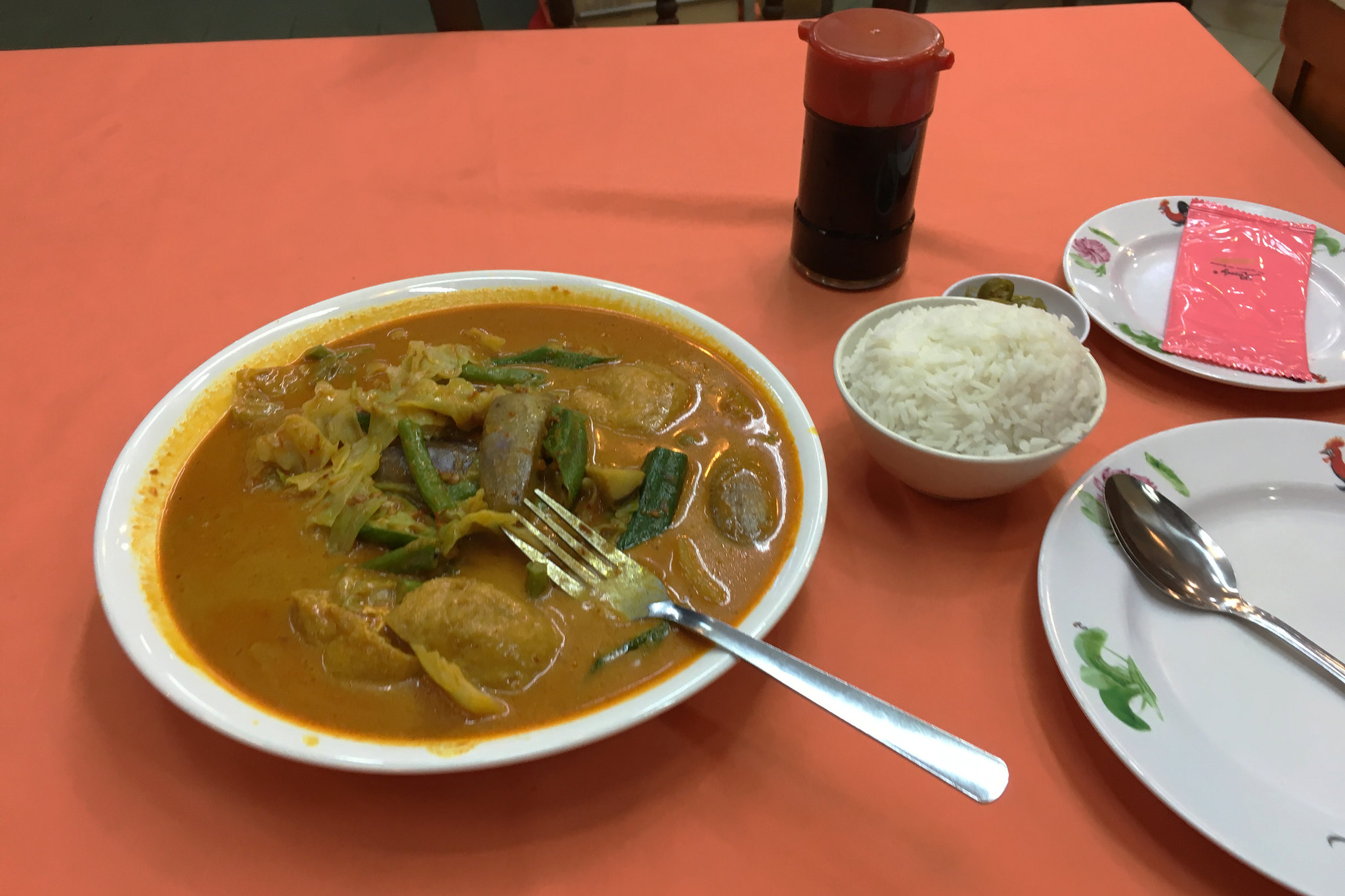 After the mall, I finally ate some food. I had been so eager to explore all day that I had forgotten to eat a real meal until this point. This vegetarian Curry was the best Curry I have ever eaten! The joint was called Restoran Dragon View. 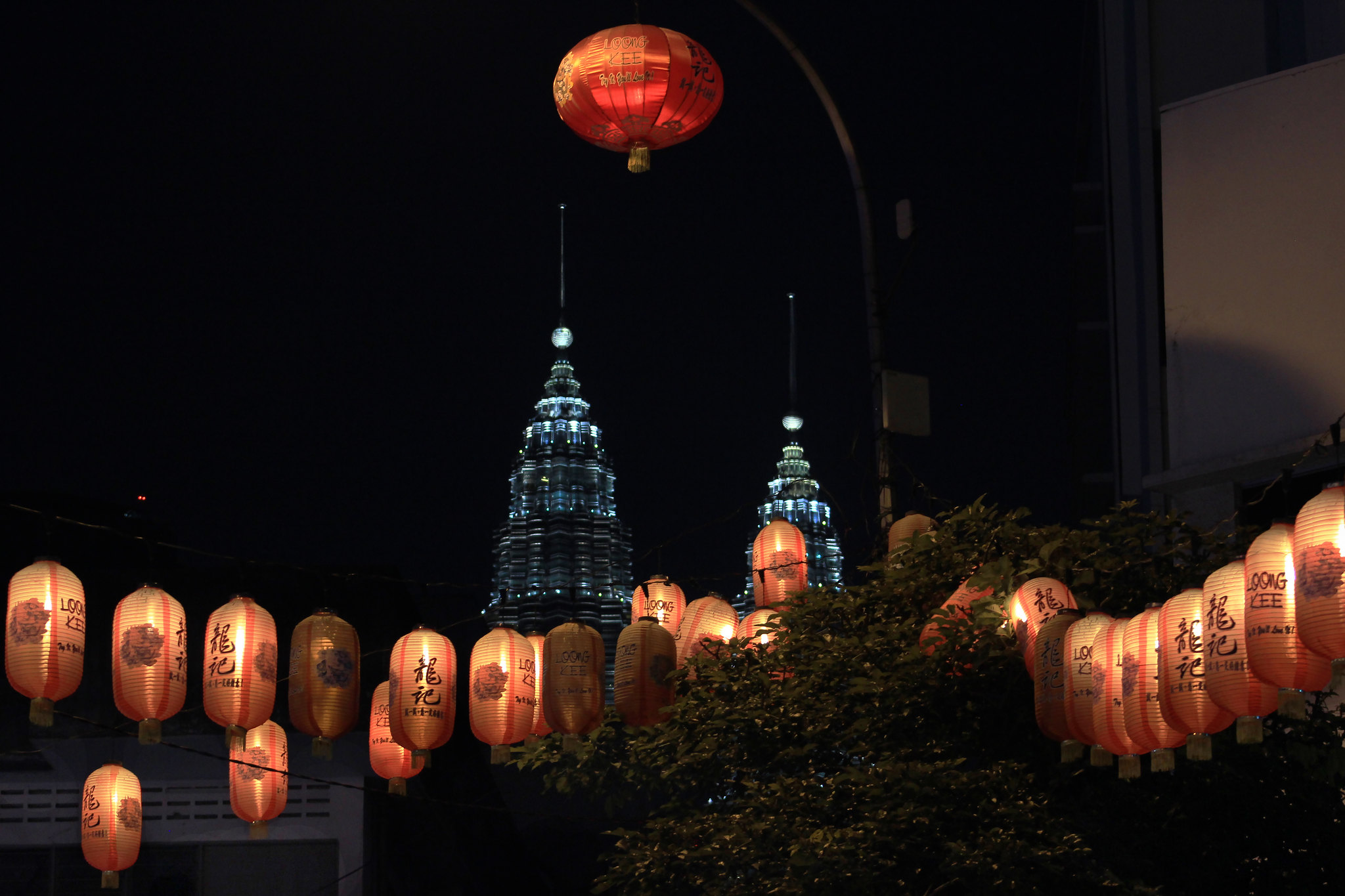 This was my view while I ate! The Petronas towers glowed while I planned out how I would get back to the airport in time for my flight. I ended up using my last few ringgits to buy a a ticket on the elevated monorail back to the train station, and then to the airport.

From my overall experience, Kuala Lumpur is a beautiful and friendly city. Everyone I interacted with was eager to talk to me and was understanding of the fact that I was basically completely lost the entire time. My primary form of transportation was a skateboard, which I would recommend to anyone who really wants to explore the city without the filter of a taxi or bus window.

Thank you for reading!