ALBUM: The People of China

China is a country of 1.4 billion individual people, and this summer I got to meet a handful of them.

Despite a tough language barrier, I was able to find a connection to so many awesome people. 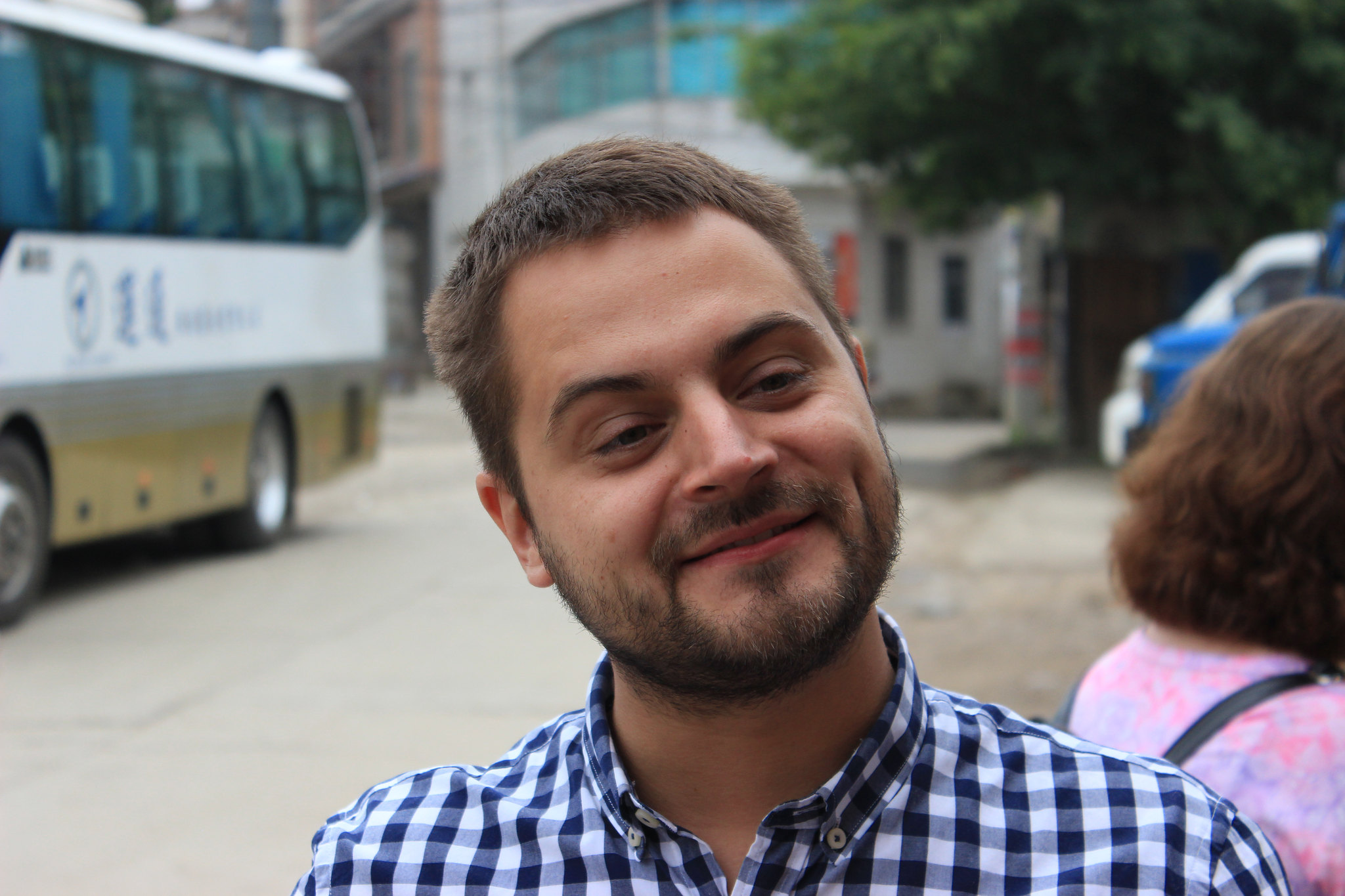 Karlis was one of my program leaders in China. He hails from Latvia but is getting his PhD in Beijing. Karlis is a well of knowledge and a formidable translator. His dialogue with with Chinese speakers gave so much insight into the workings of the Chinese individual. Plus he’s the nicest guy you will ever meet. 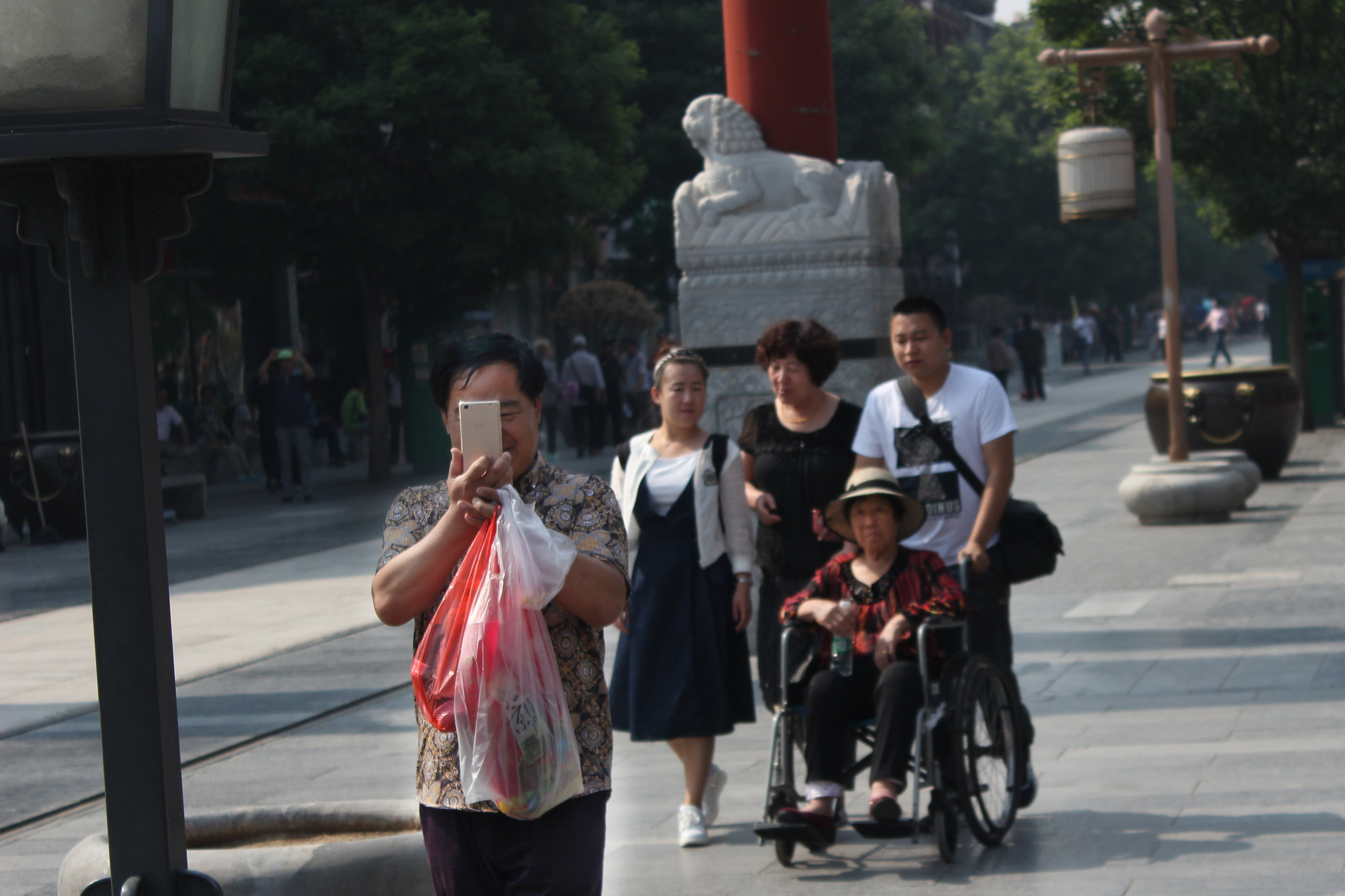 A large group of Americans was a noteworthy sight for these Chinese people. Our group was the subject of many many photos taken by passersby. This man outside of Tienanmen square was my first experience on the other side of the lenses during my stay in China. 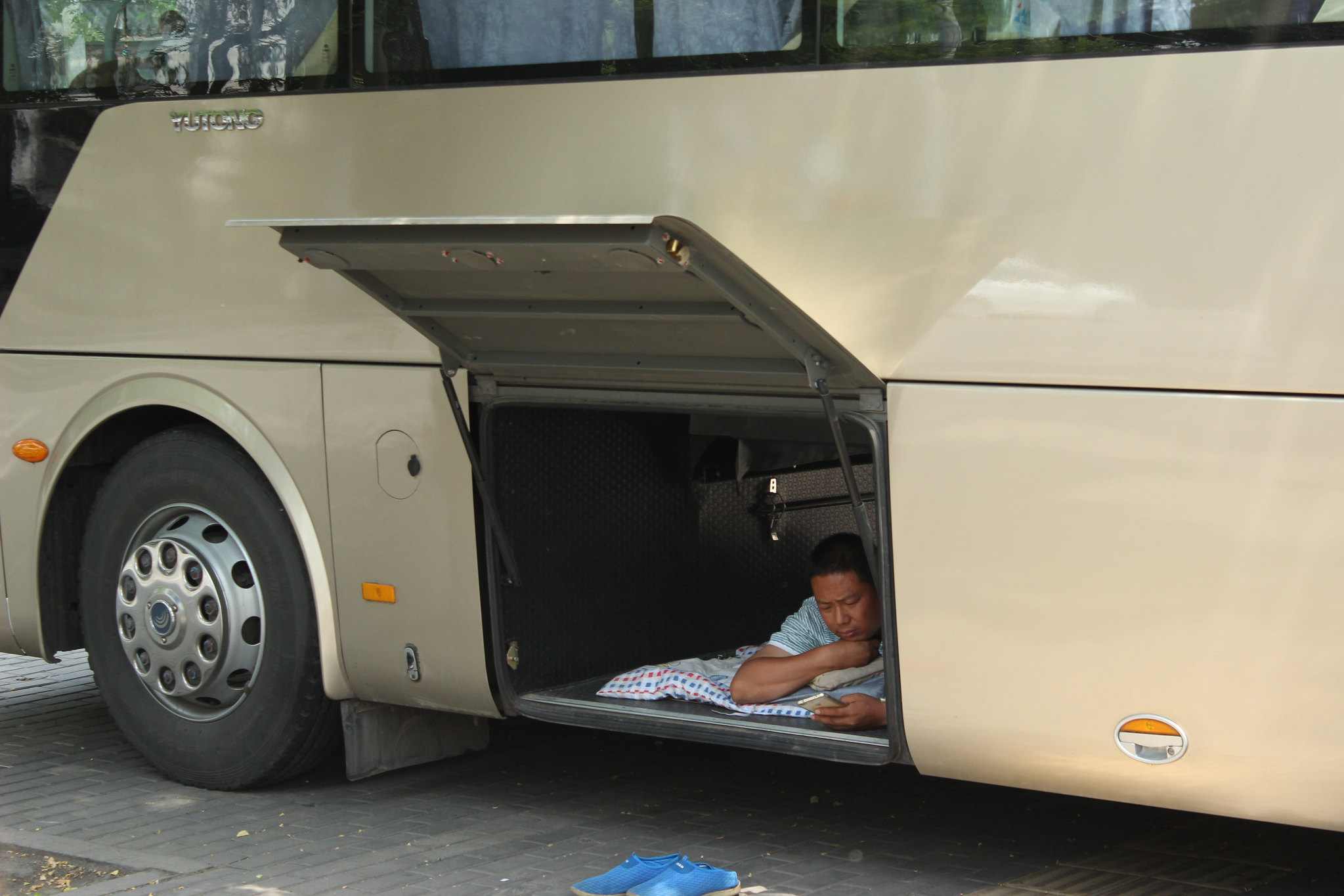 This bus driver lies under his bus eyeing his smartphone as he waits for his group of tourists to return from the Forbidden City and Tienanmen Square. Large tour buses packed with both Chinese citizens and international groups were a very common sight in Beijing. 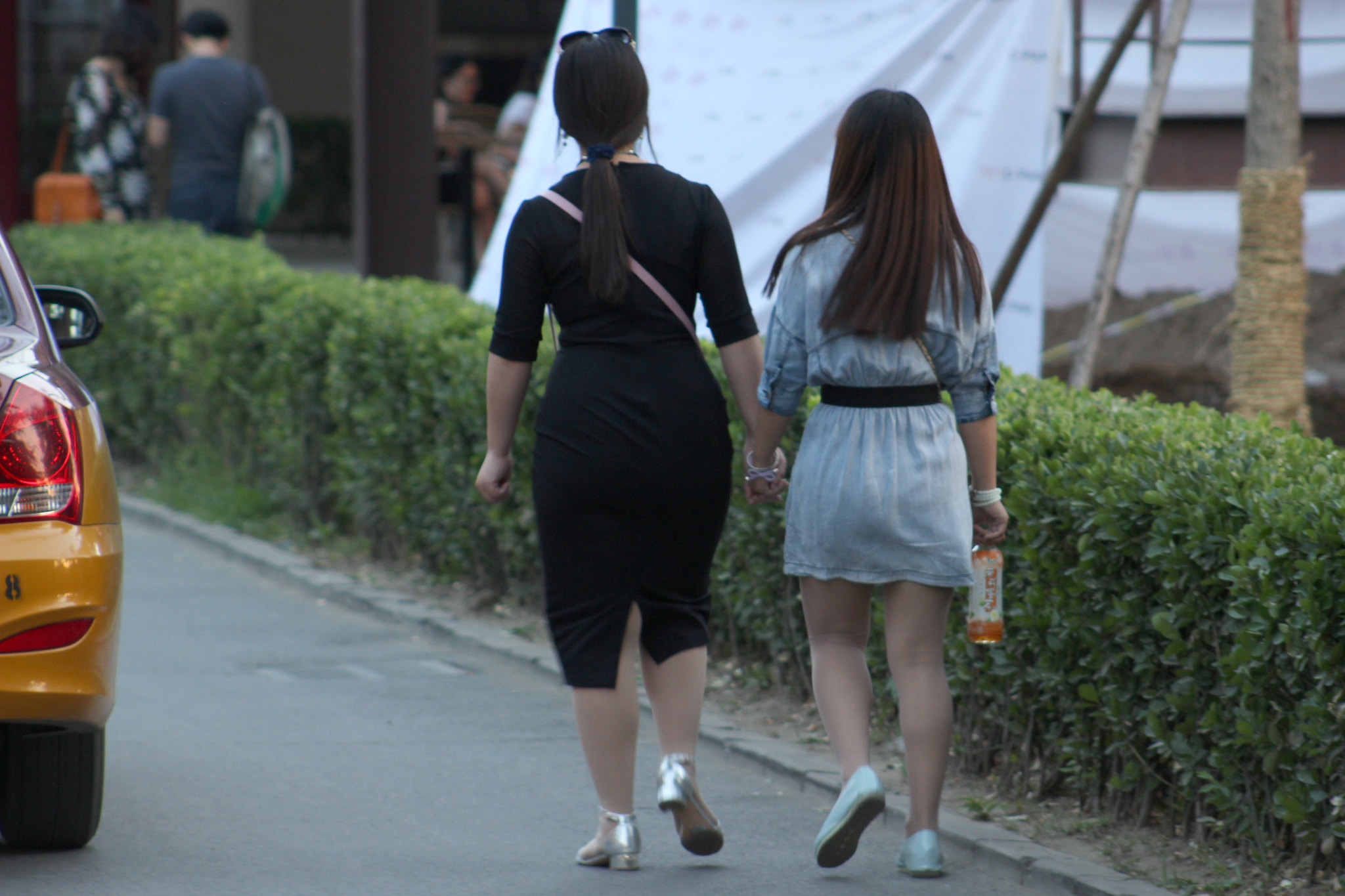 This gay couple walks through the 798 arts district in Beijing. Public homosexual affection is not promoted in China, but that is changing as China follows a trend towards more individual freedoms. 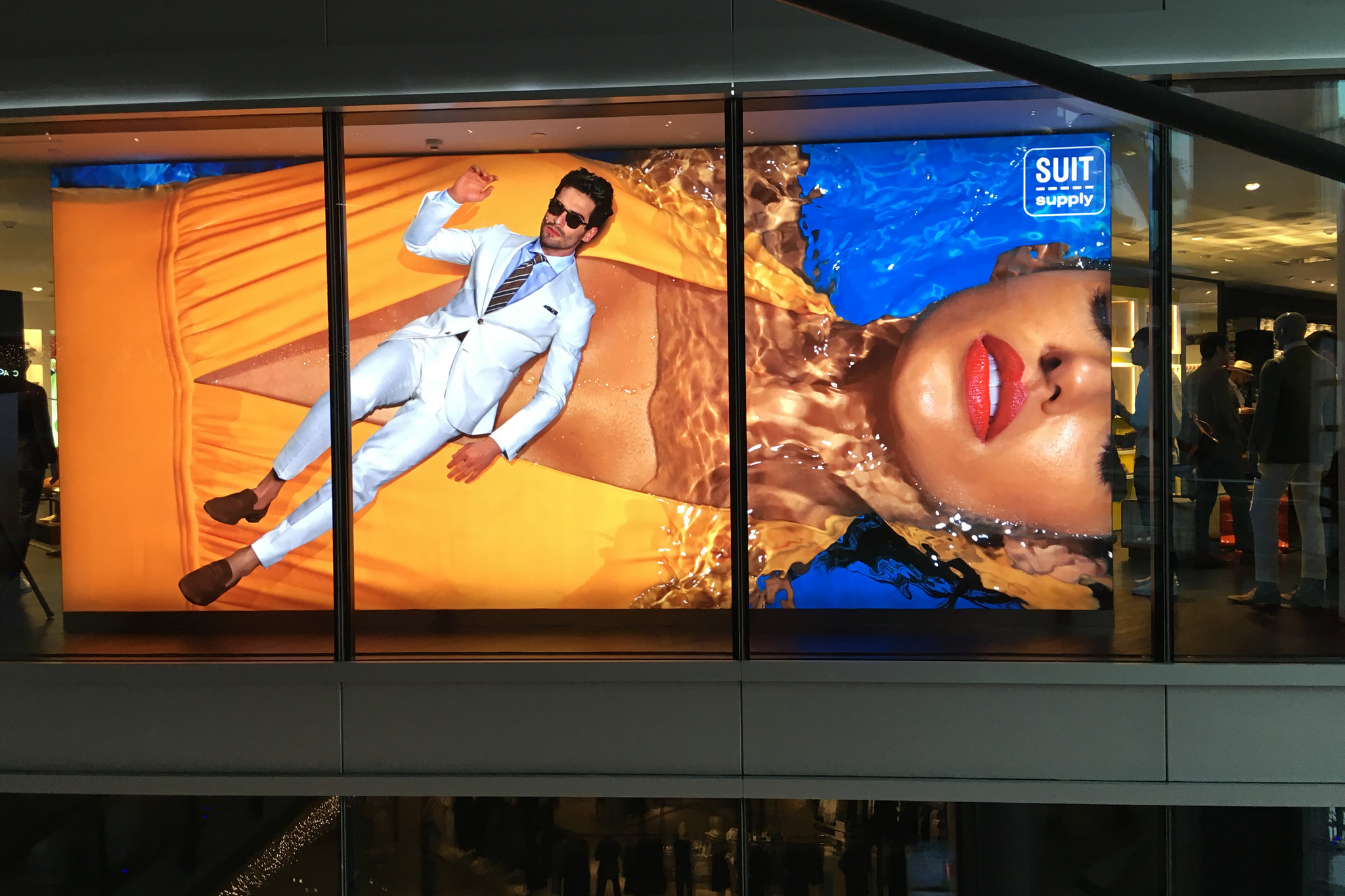 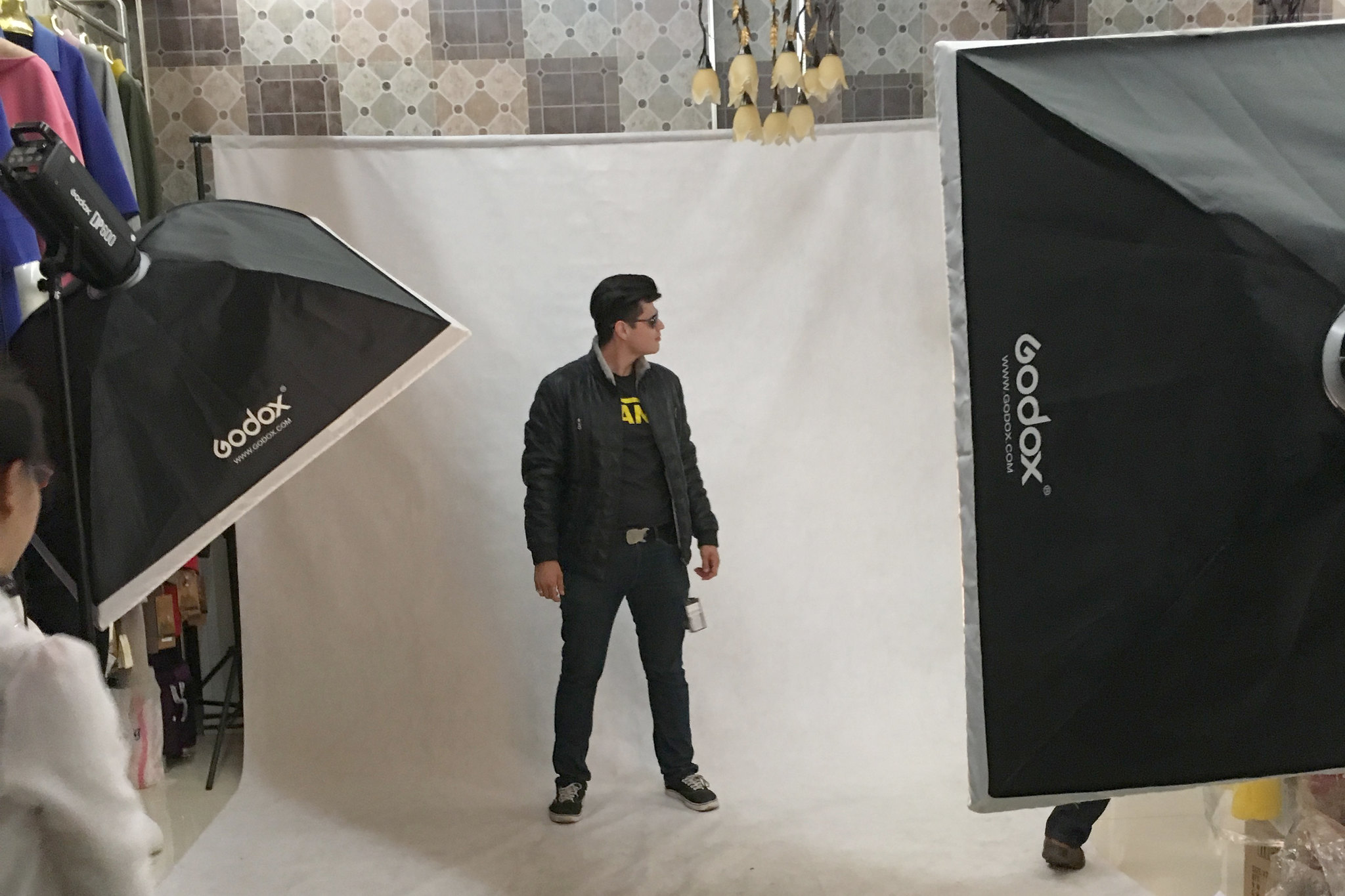 Literally minutes before coming across the advertisement above, my U.S. friend Rafael was asked to model a fur coat in the the “Russiatown” area of Beijing. The sales associate in the fur coat store was insistent that Rafael model the jacket because he was the perfect height and complexion. 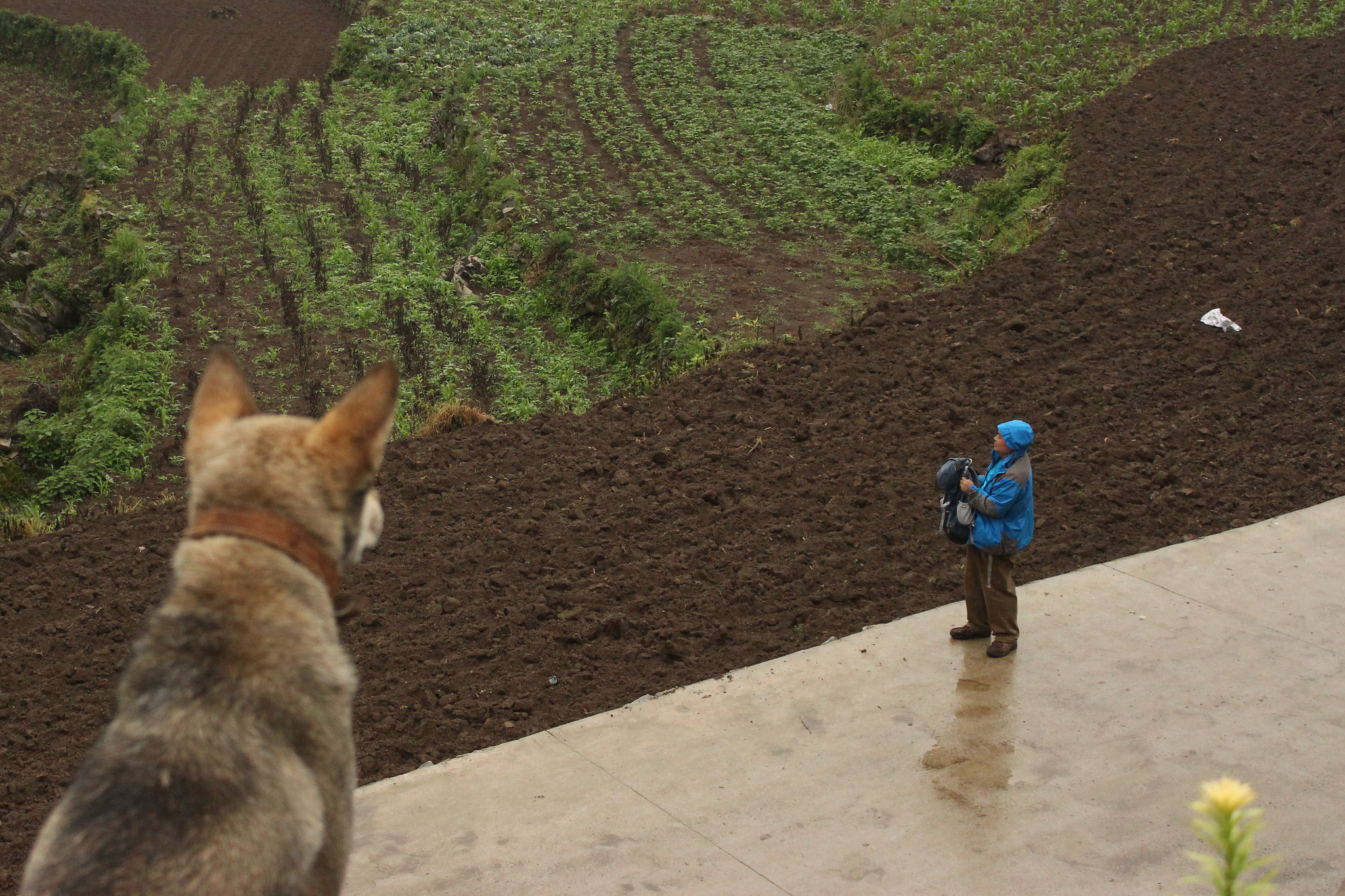 Mr. Zhou was our guide in Guizhou. On our second day in the province we traveled to Luizhi to meet Mr.Zhou’s family and see his village. A dog owned by his family watches him from above as he prepares for more rain. 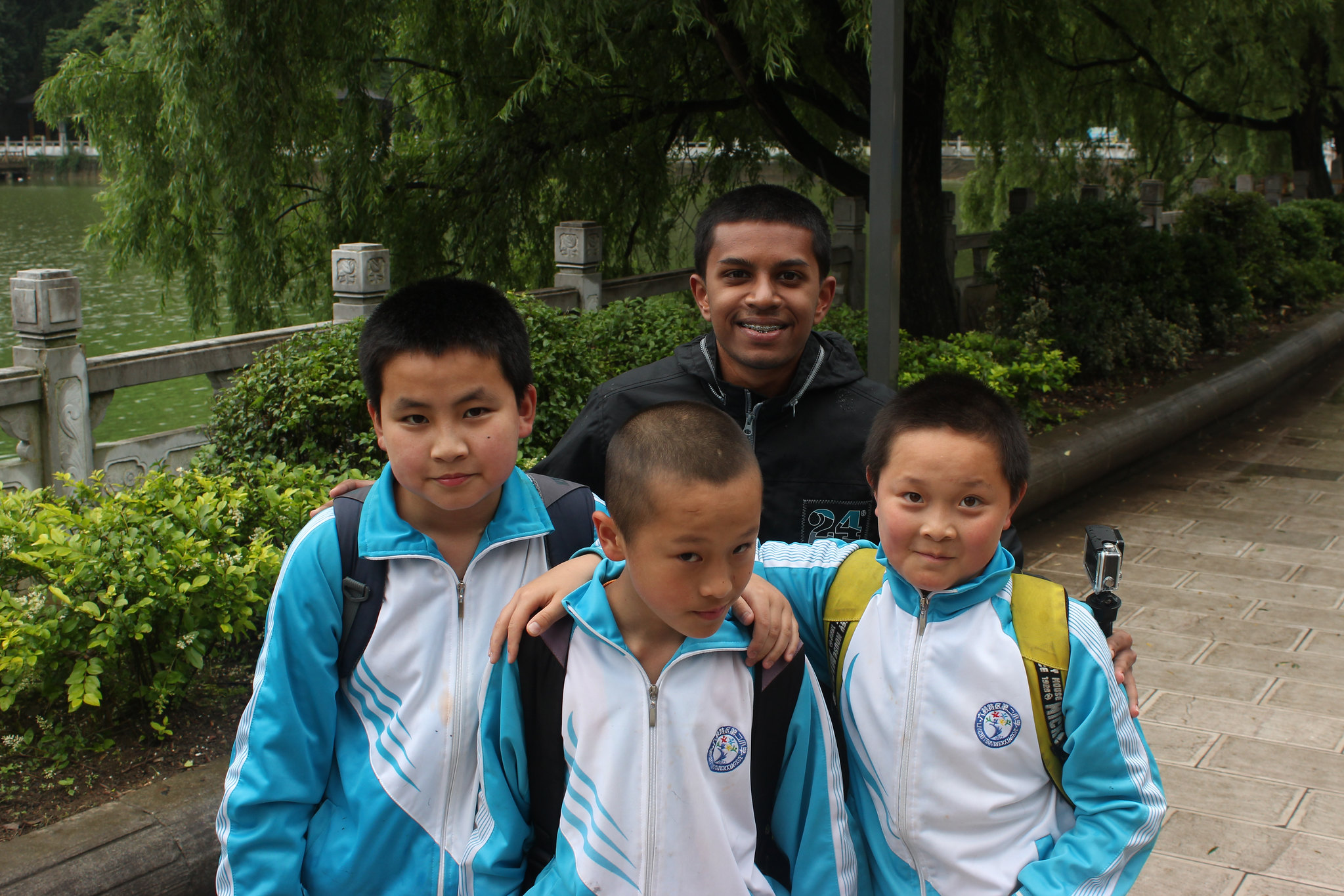 Abhijay poses for a photo with three mischievous schoolboys in Luizhi. These boys spoke some elementary English and were eager to communicate with us. After this photo, they followed us around, snickering and trying to capture some photos of their own. 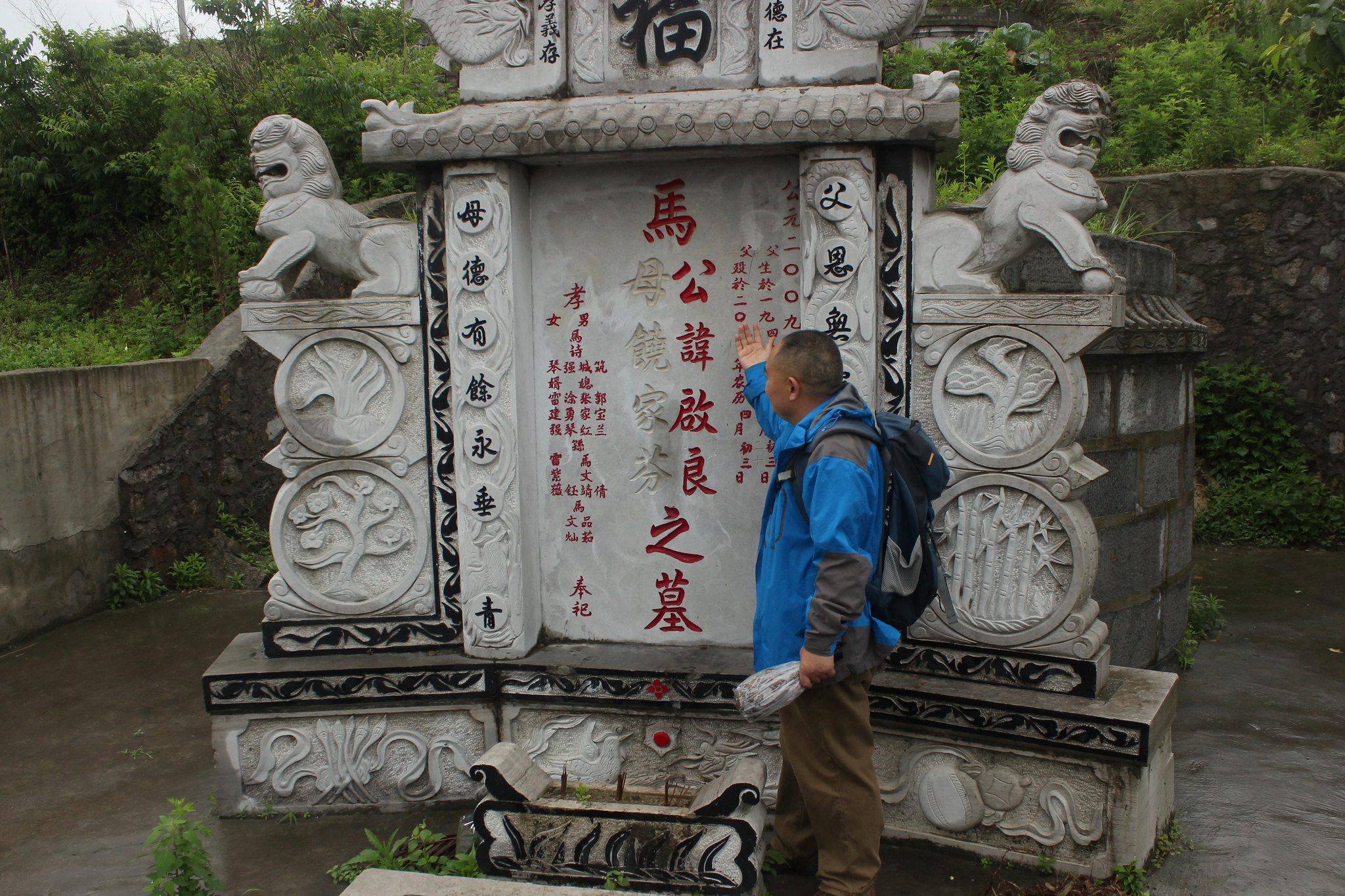 On the way to his family’s home, Mr. Zhou stops to show us the grave of a couple from the area. One of the two has yet to die, therefore their name is not yet painted in red on the grave. 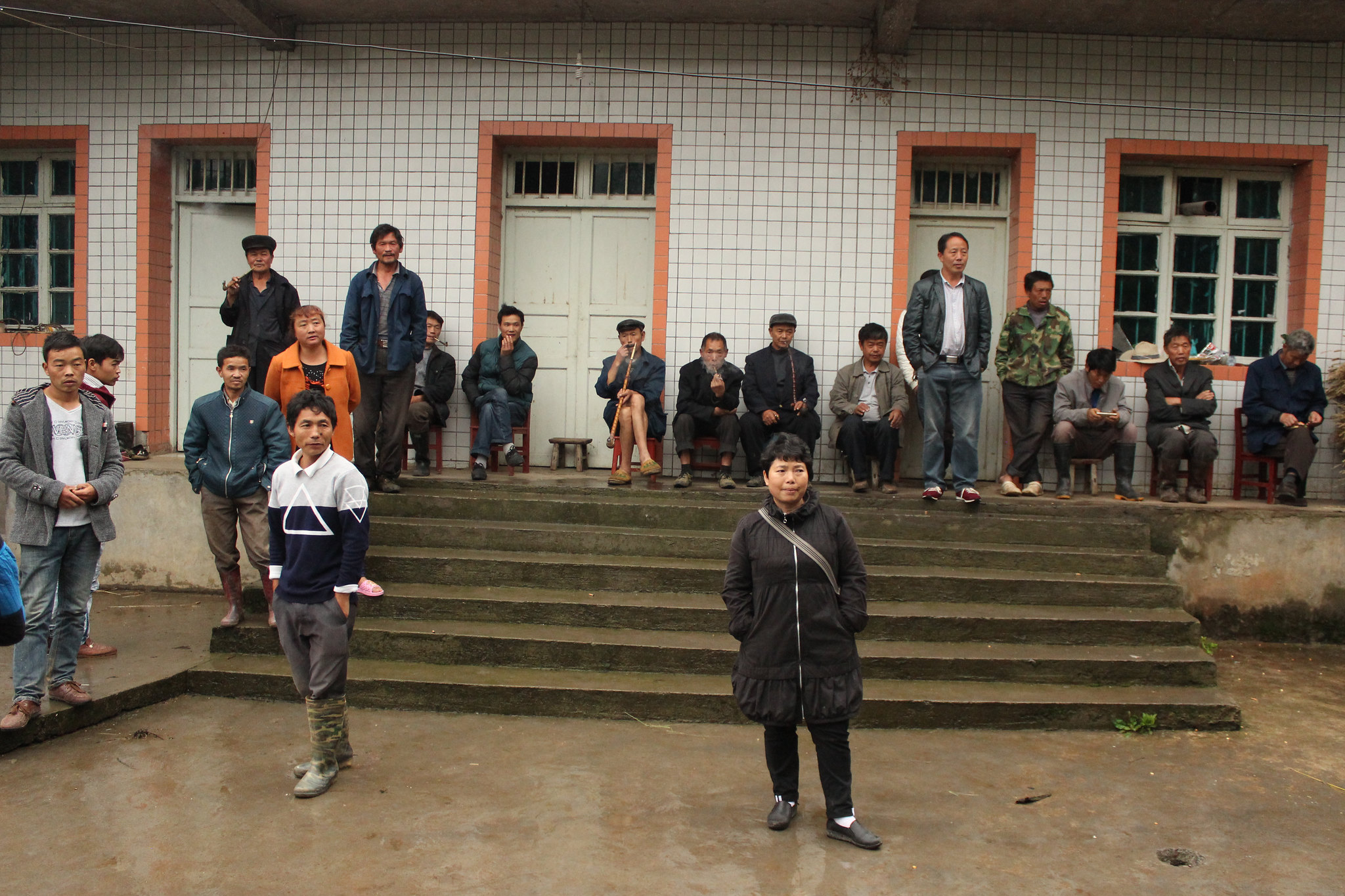 Mr. Zhou’s entire family stands around hesitantly before our lunch with them. This clash of two culturally very different groups of people in a rural village is a moment will stick with me. 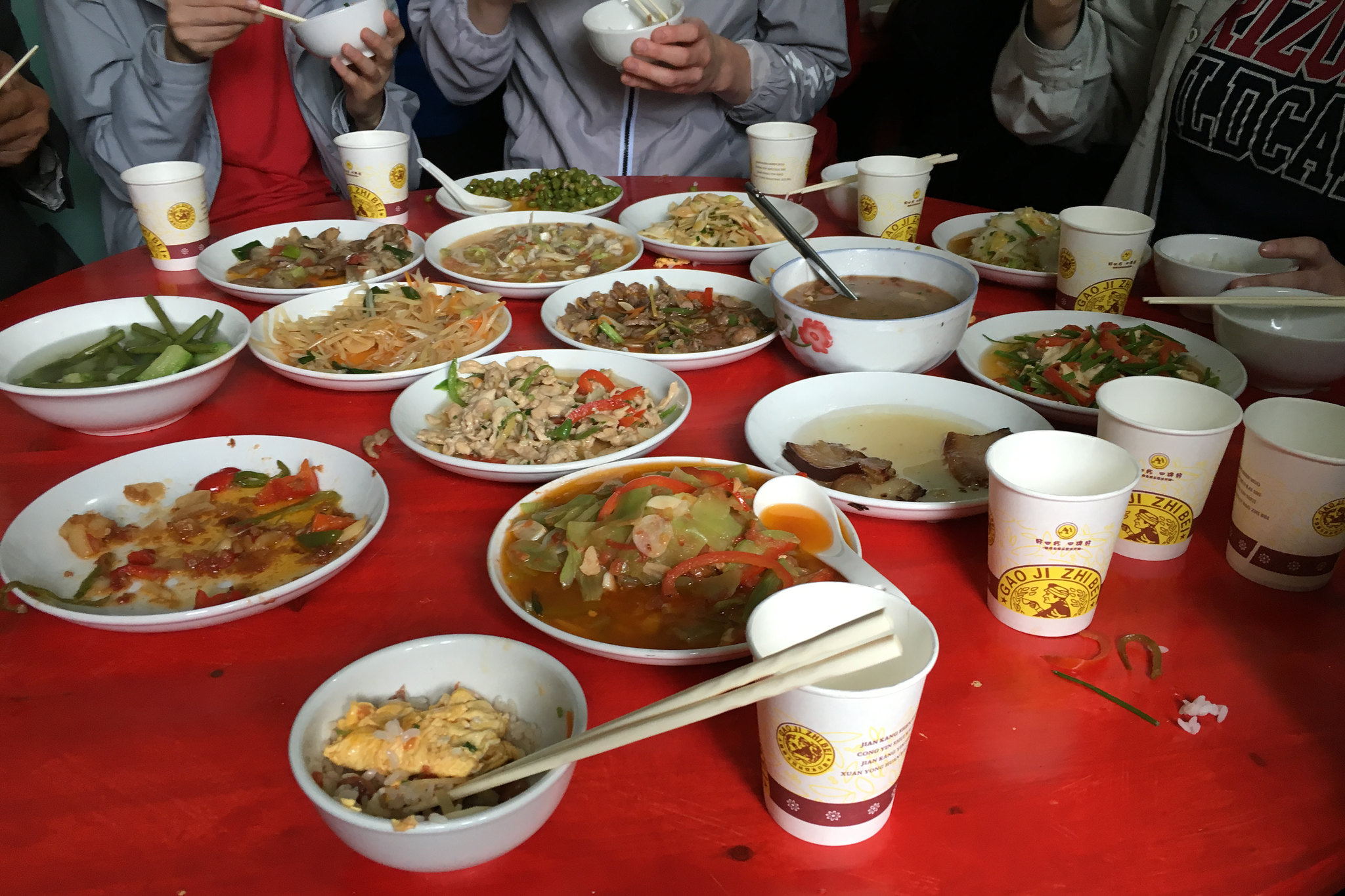 Despite the language barrier, we shared a friendly and tightly-packed lunch together, humored by the differences in our table manners. 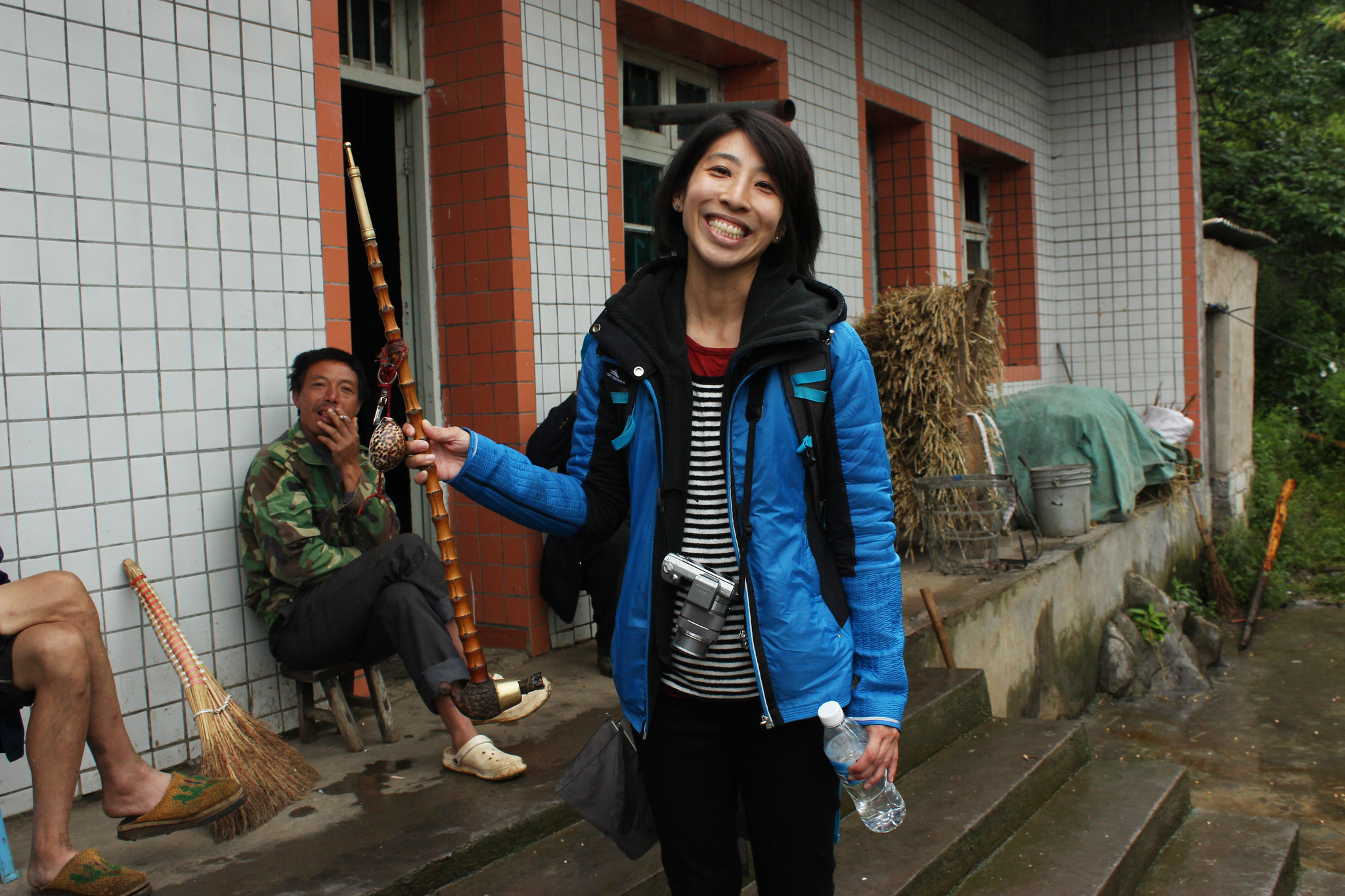 My instructor Dr. Chau shows off a long tobacco pipe that a man in Mr. Zhou’s family uses to smoke. Even a small puff of this extremely strong tobacco will induce an intense head rush. 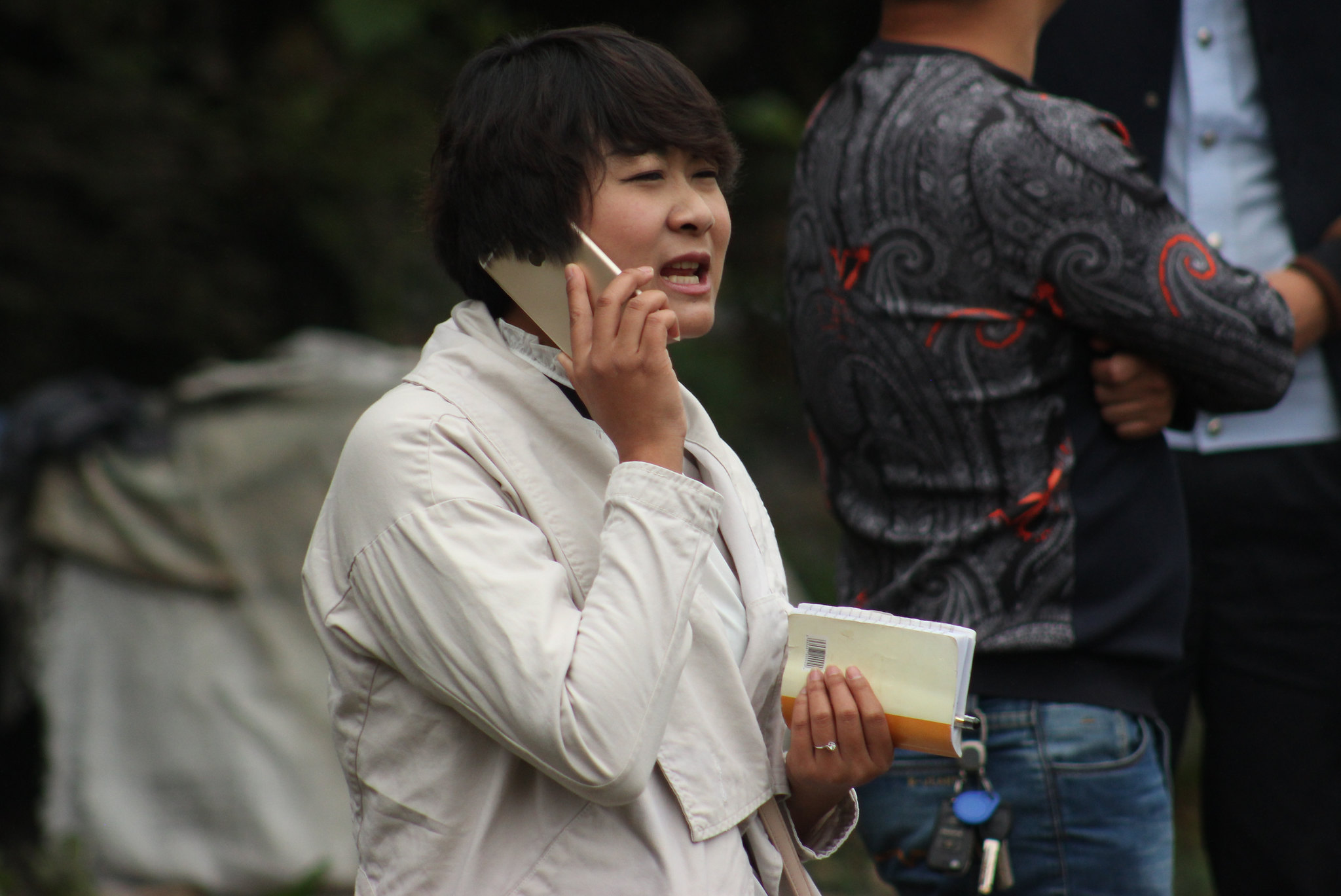 This busy women talks on her iPhone in the ethnic minority village of Buyizu, which was actively being turned into a tourist attraction when we visited. She was a leader within the locally elected government and took a least one phone call every three minutes during our walk with her. 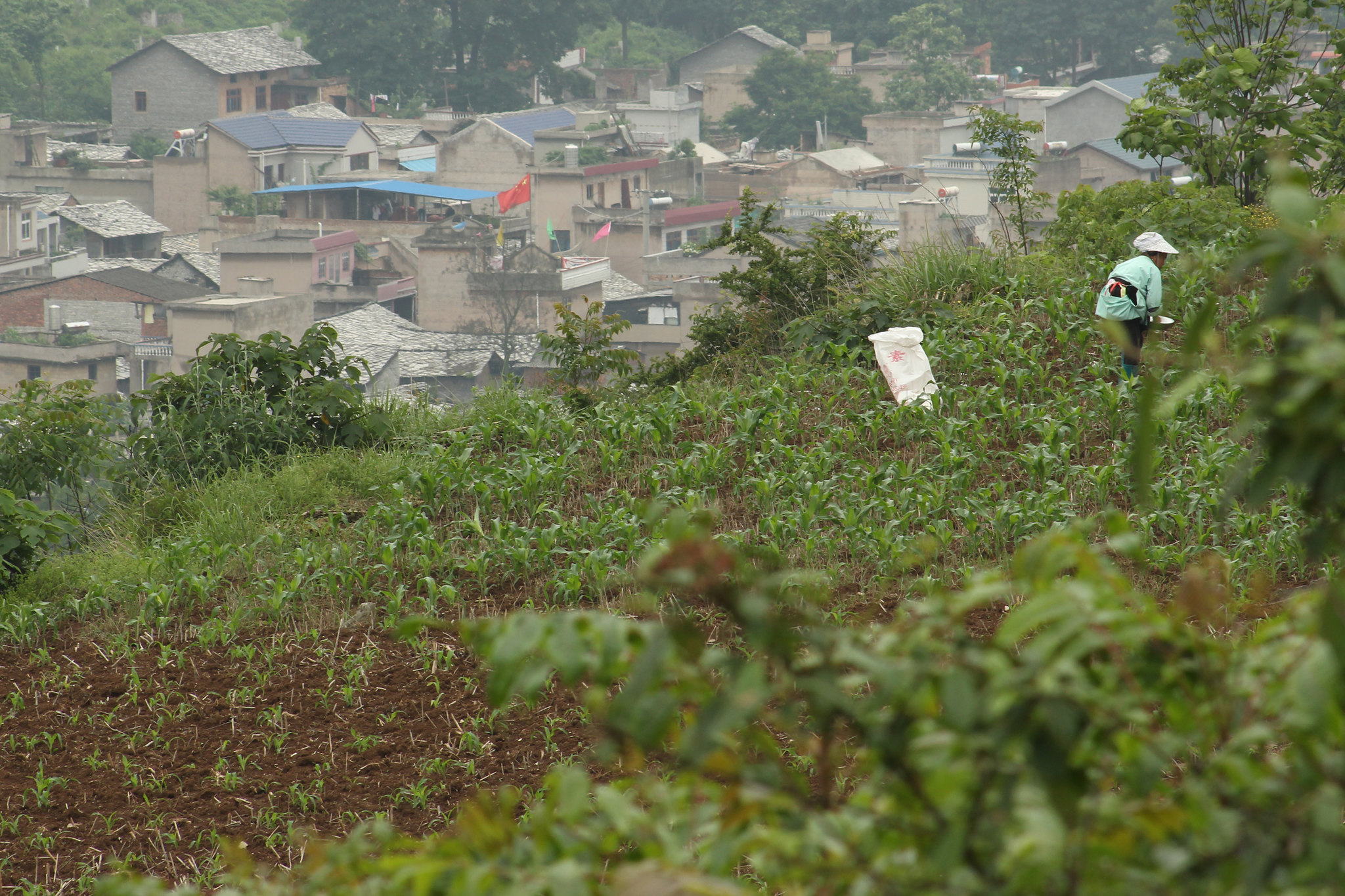 Once we arrived at our homestay in the village of Jichang, we began to feel the pulse of day to day rural life. Elderly women are the backbone of Chinese agriculture, often with a grandchild on their back and a pickaxe over their shoulder. 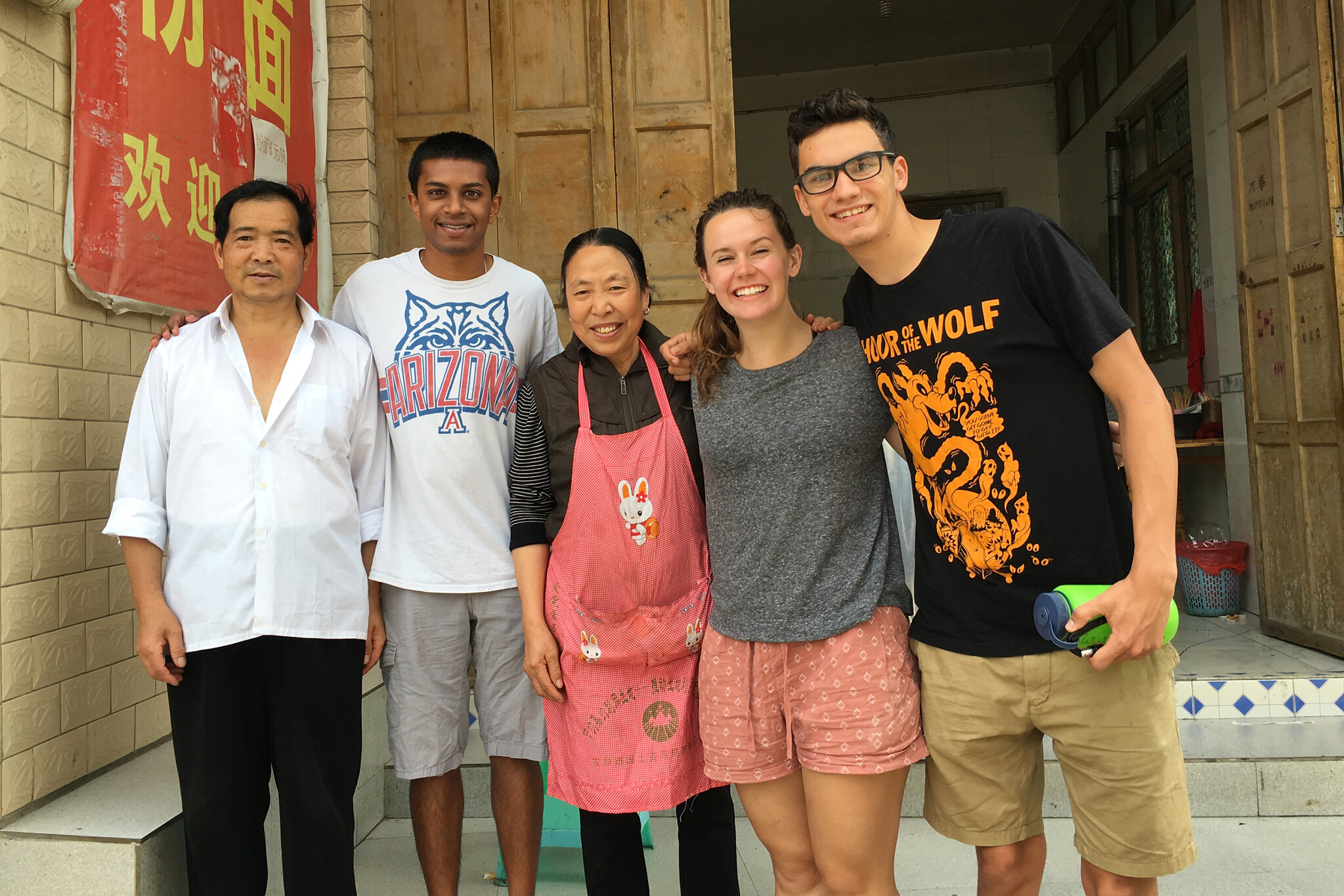 Our host parents in Jichang ran a noodle shop out of their front door. Waking up early and staying up late was the daily routine for all of us during those five days. 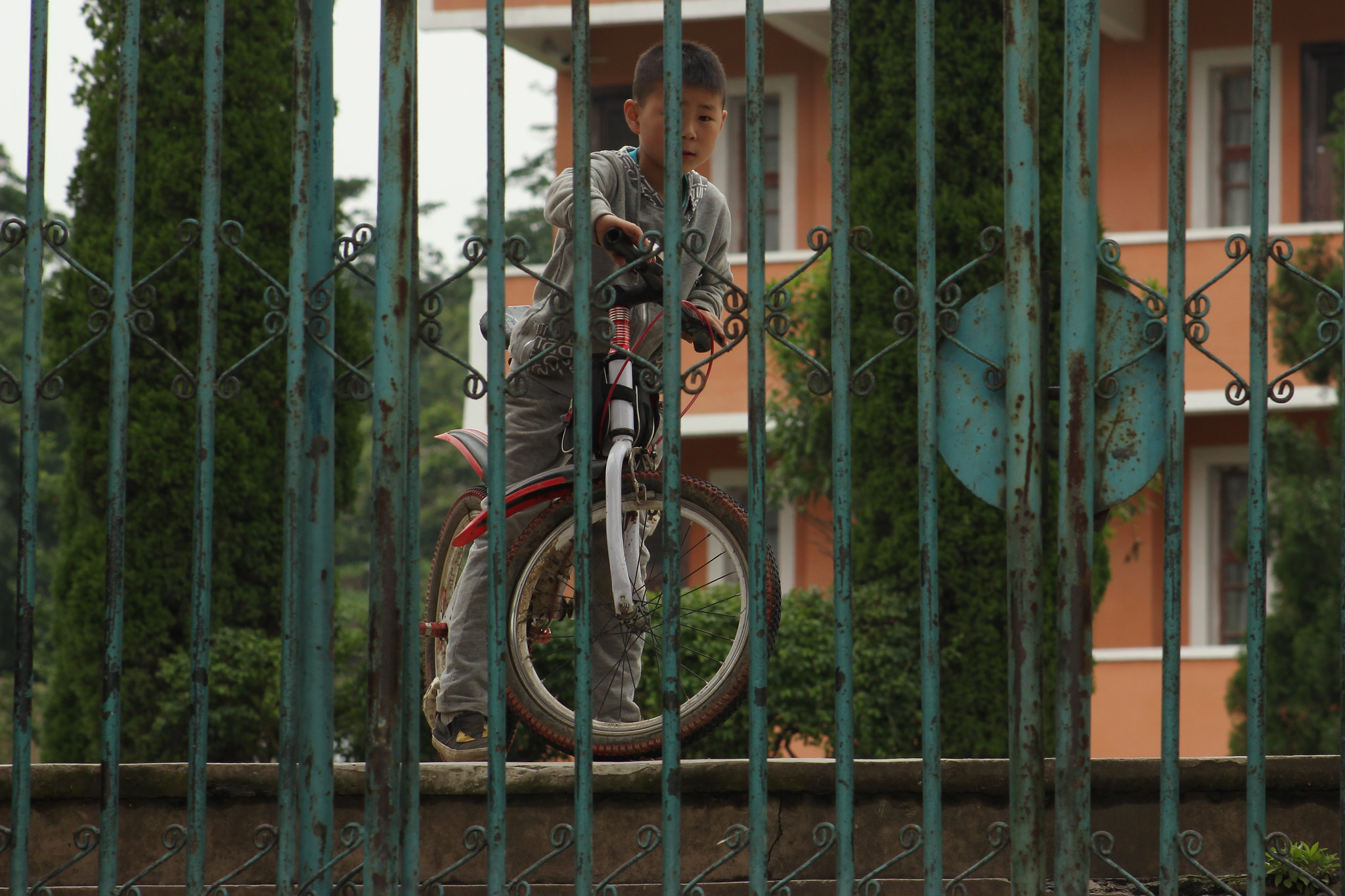 A boy watches us from the school courtyard in Jichang as we prepare to give English lessons to a few groups of students. 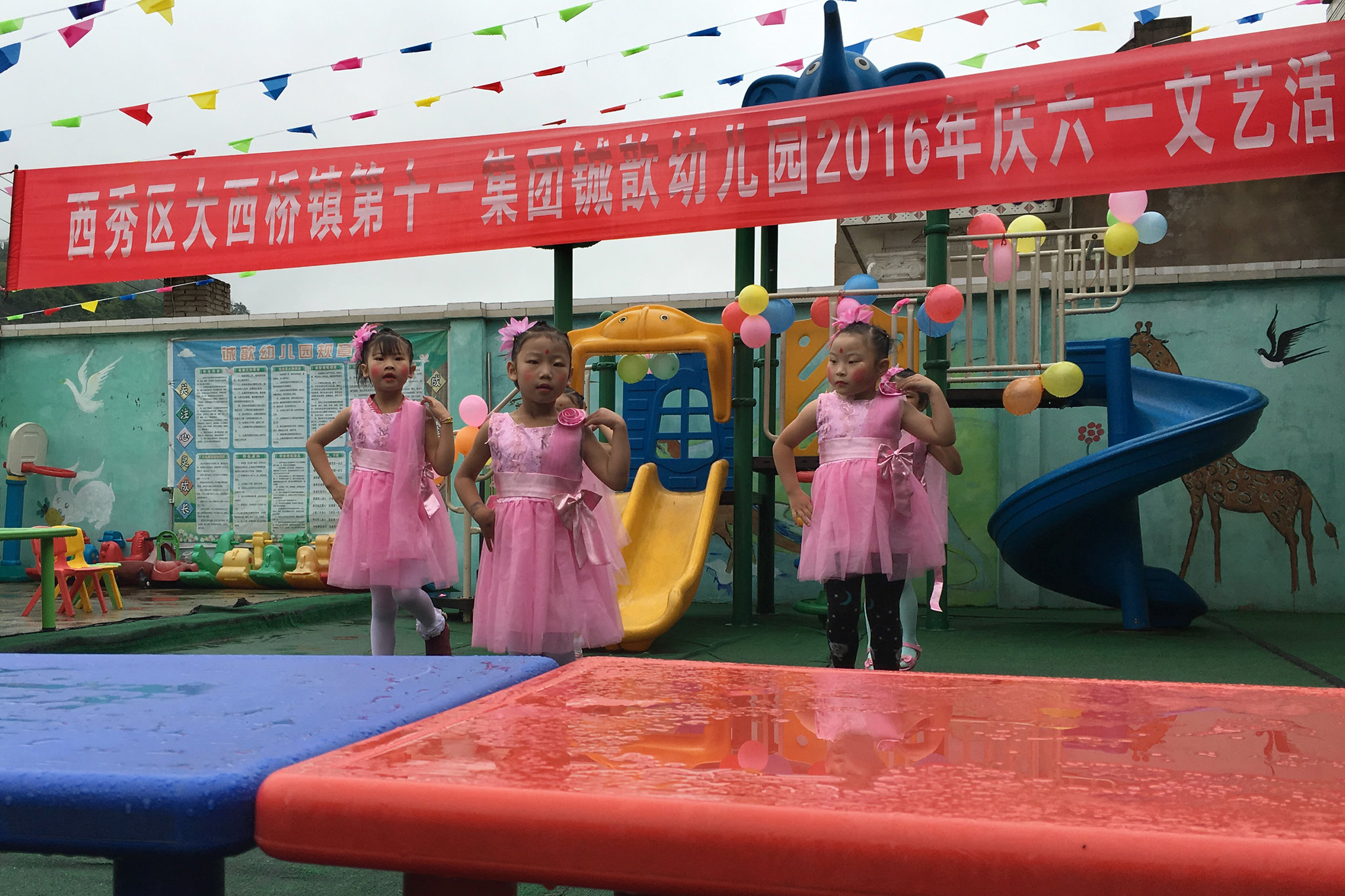 The kindergarten puts on a performance for us in celebration of international children’s day. These kids had nearly twenty different routines memorized to perform that day. 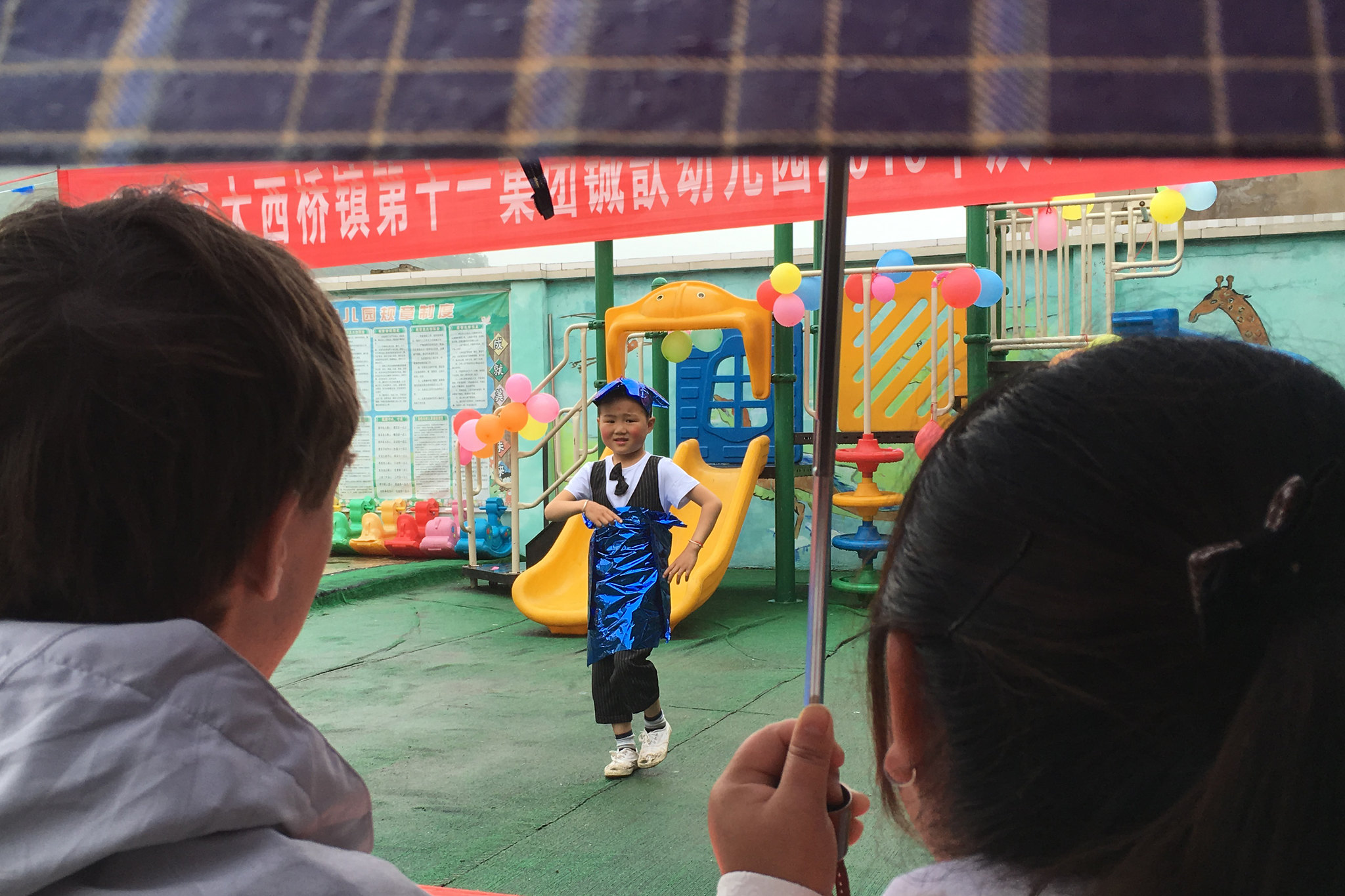 A boy from the kindergarten shows off the outfit that he made for the aluminum foil fashion show. 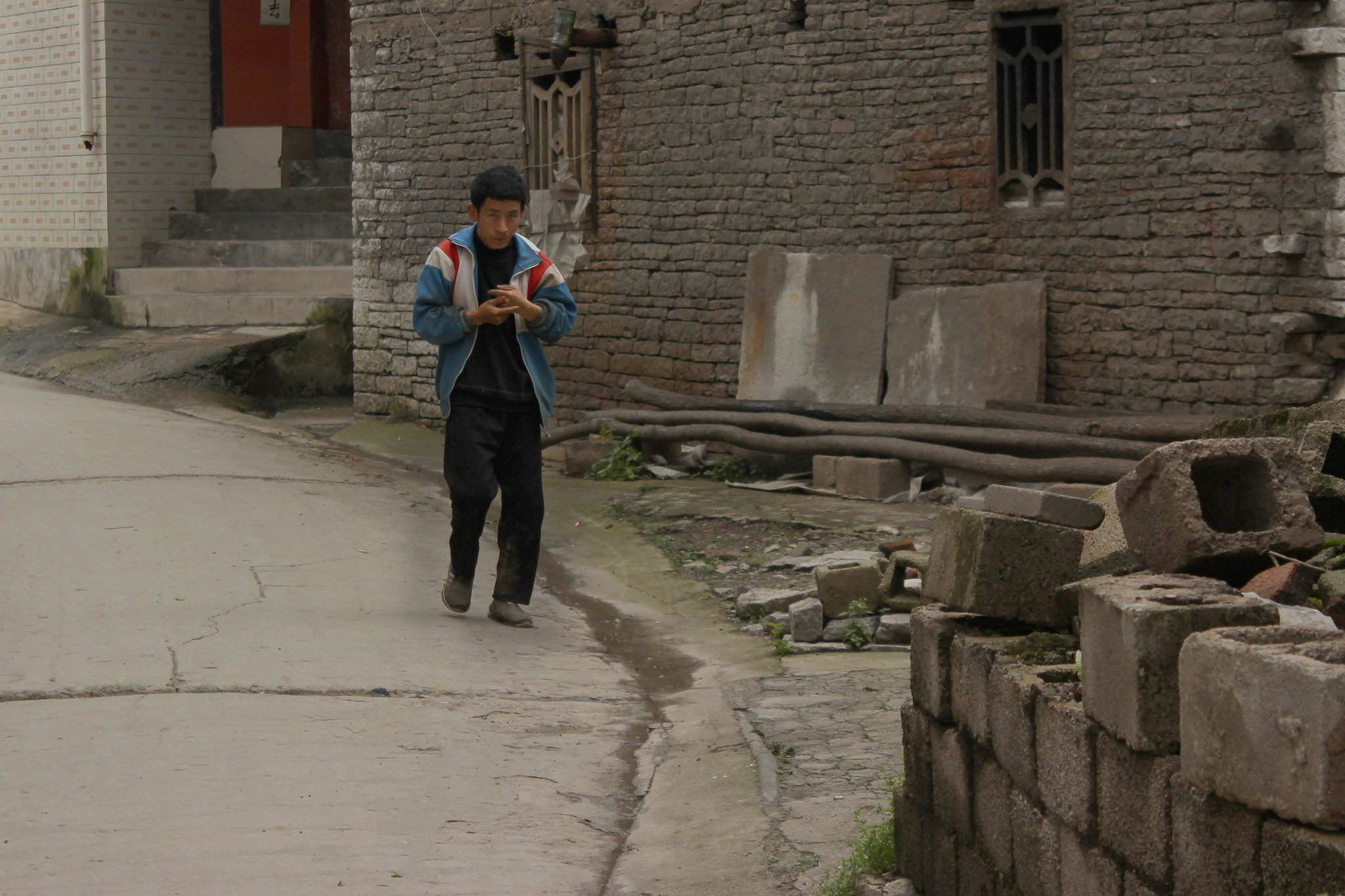 A familiar face in Jichang village was that of this man with a mental disability. He was fascinated by us and would follow us closely down the narrow streets of the village. Due to China’s lack of programs for those with mental disabilities, many of these individuals end up being cared fore in rural villages. 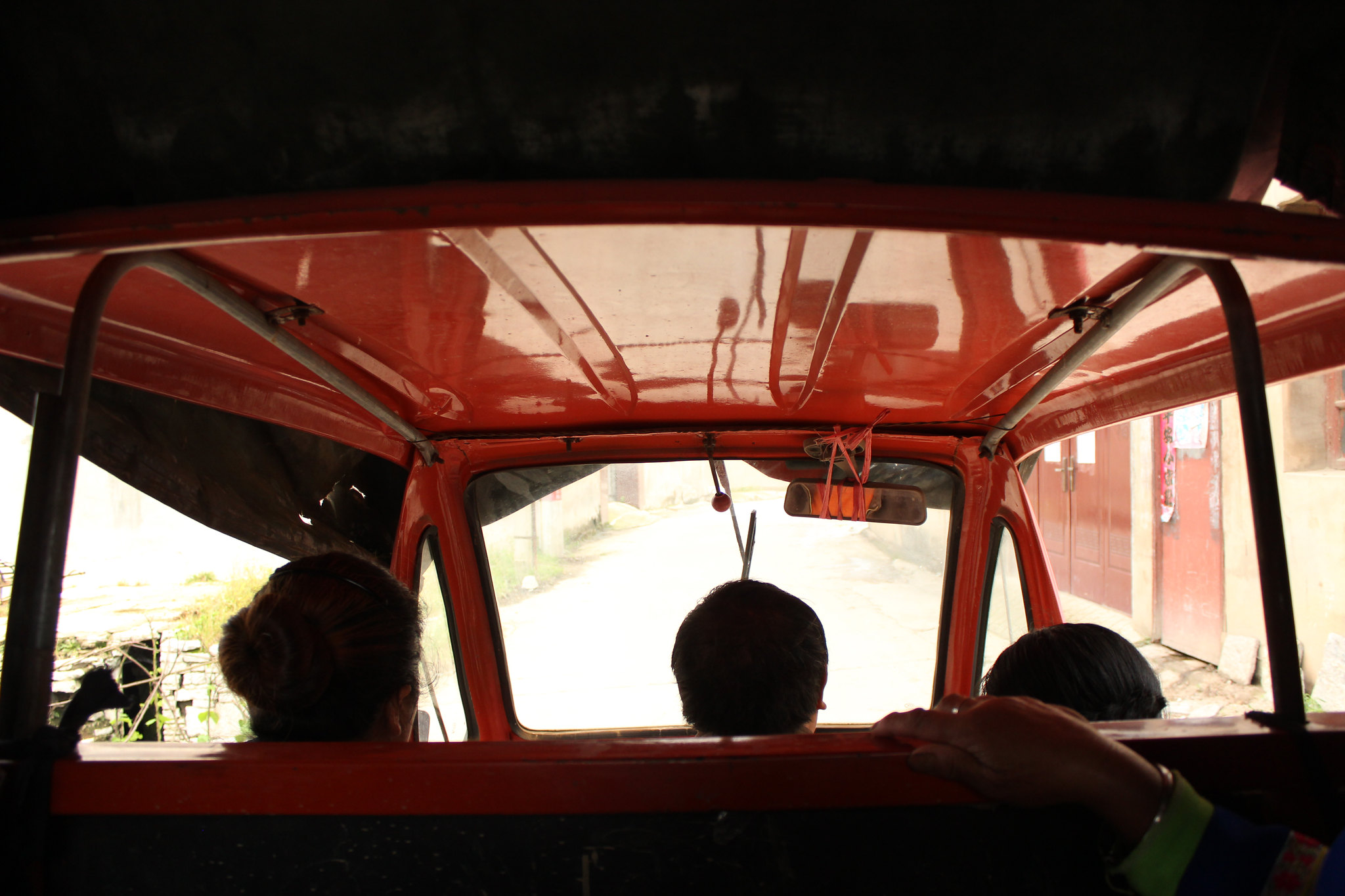 Our host grandma rides in the front of a rickshaw to the nearby market while the rest of sit in the back on unstable boards. The drives I experienced in China were more precariously then in the states. Instead of slowing down at sharp turns and blind interactions, the drivers would just blowing their horn to let others know that they were coming. 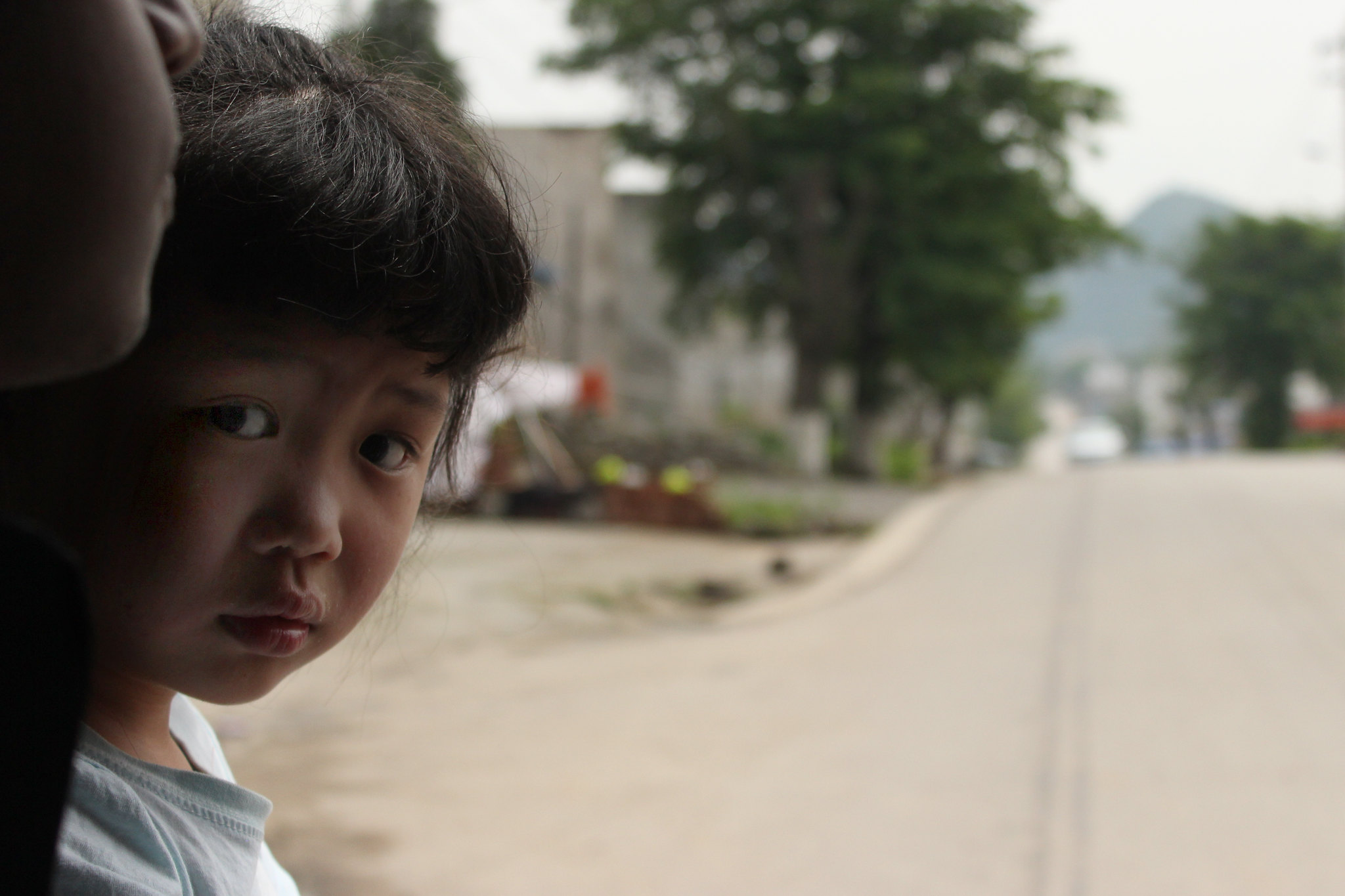 A young girl eyes me curiously as I take photos out of the back of the rickshaw. 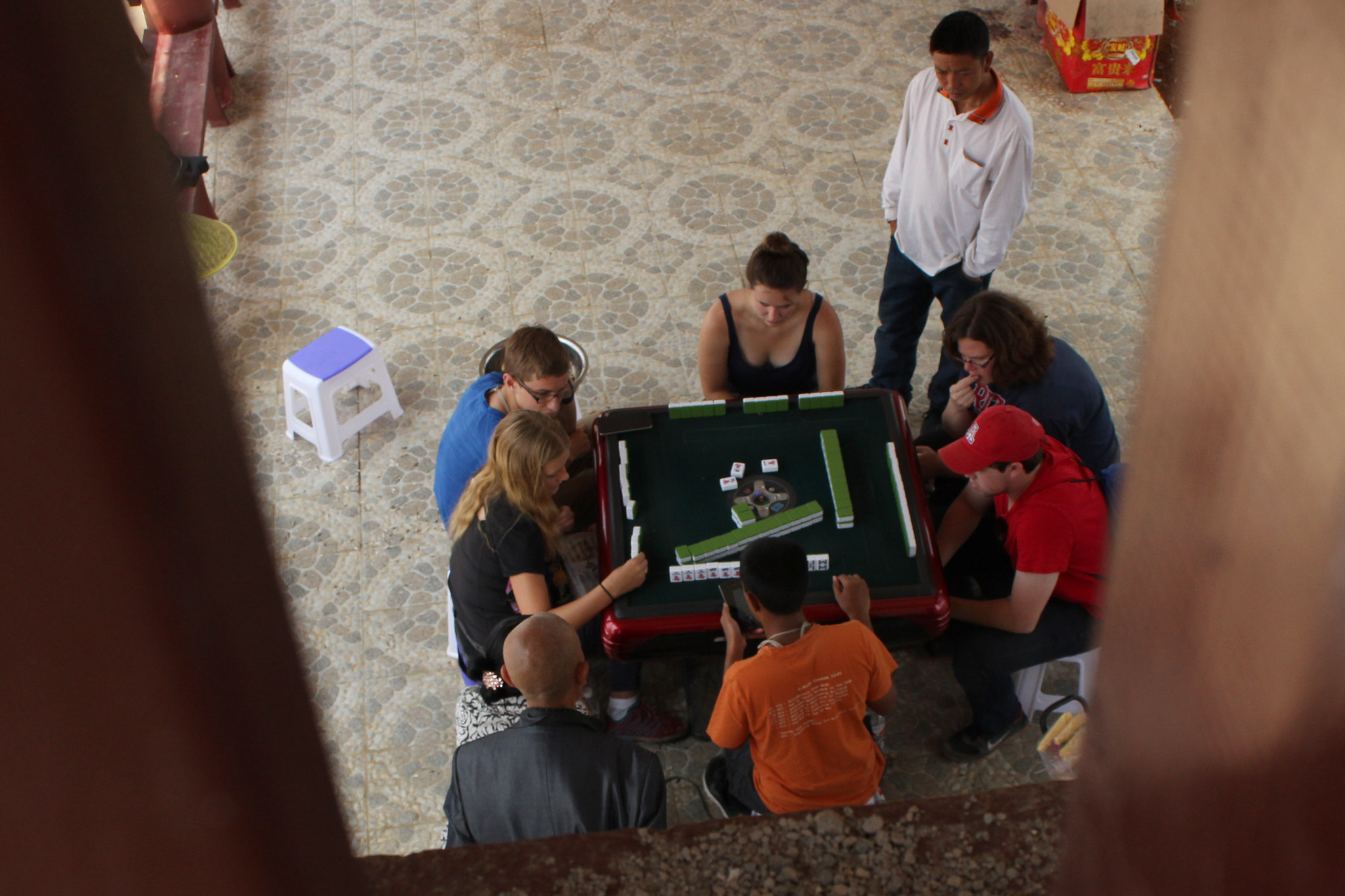 Several members of my group play Mahjong while two Chinese men look on in interest. Many of the adults in the village played this game late into the night, drinking and gambling. 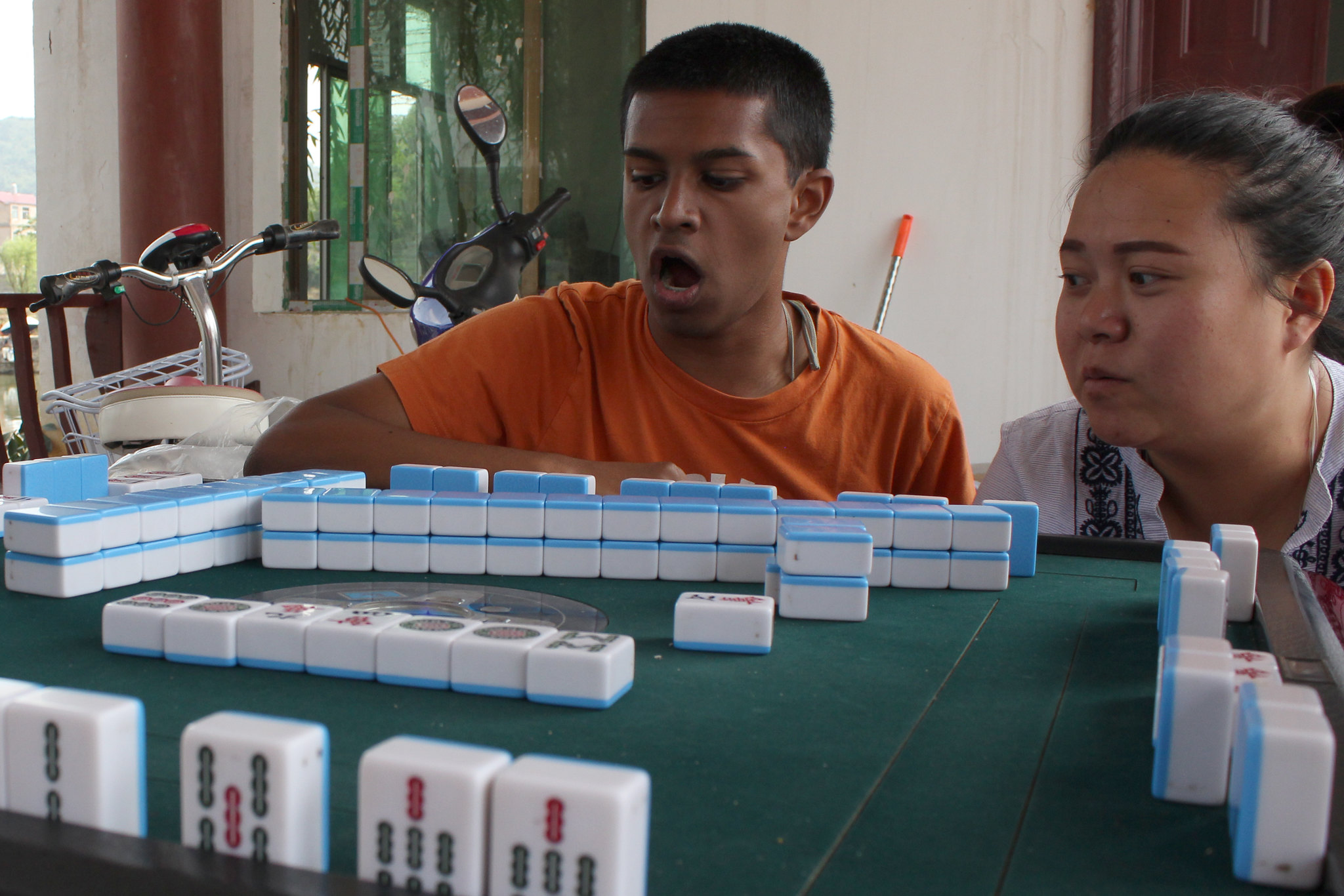 Abhijay cheers during a game of mahjong while Domino watches. Domino is a relative of Mr. Zhou and was our second tour guide. Domino strong suite was street smarts. She could guide us through any situation from eating in street markets to playing mahjong late at night. 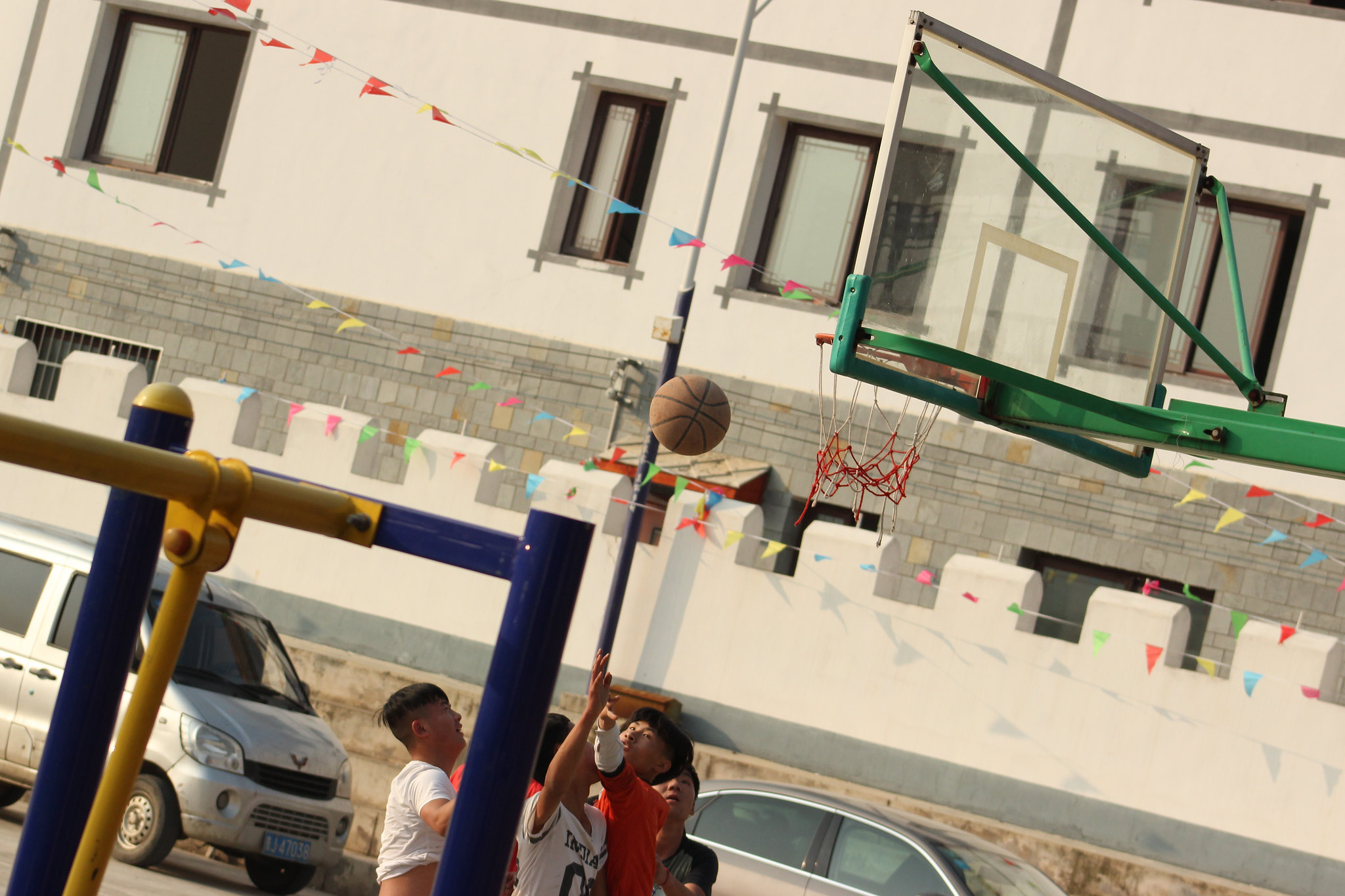 Near the Mahjong table, a group of kids plays basketball. Not only did our host grandma’s son’s business have mahjong and basketball, there was also a small lake to fish in and a grill to barbecue on. 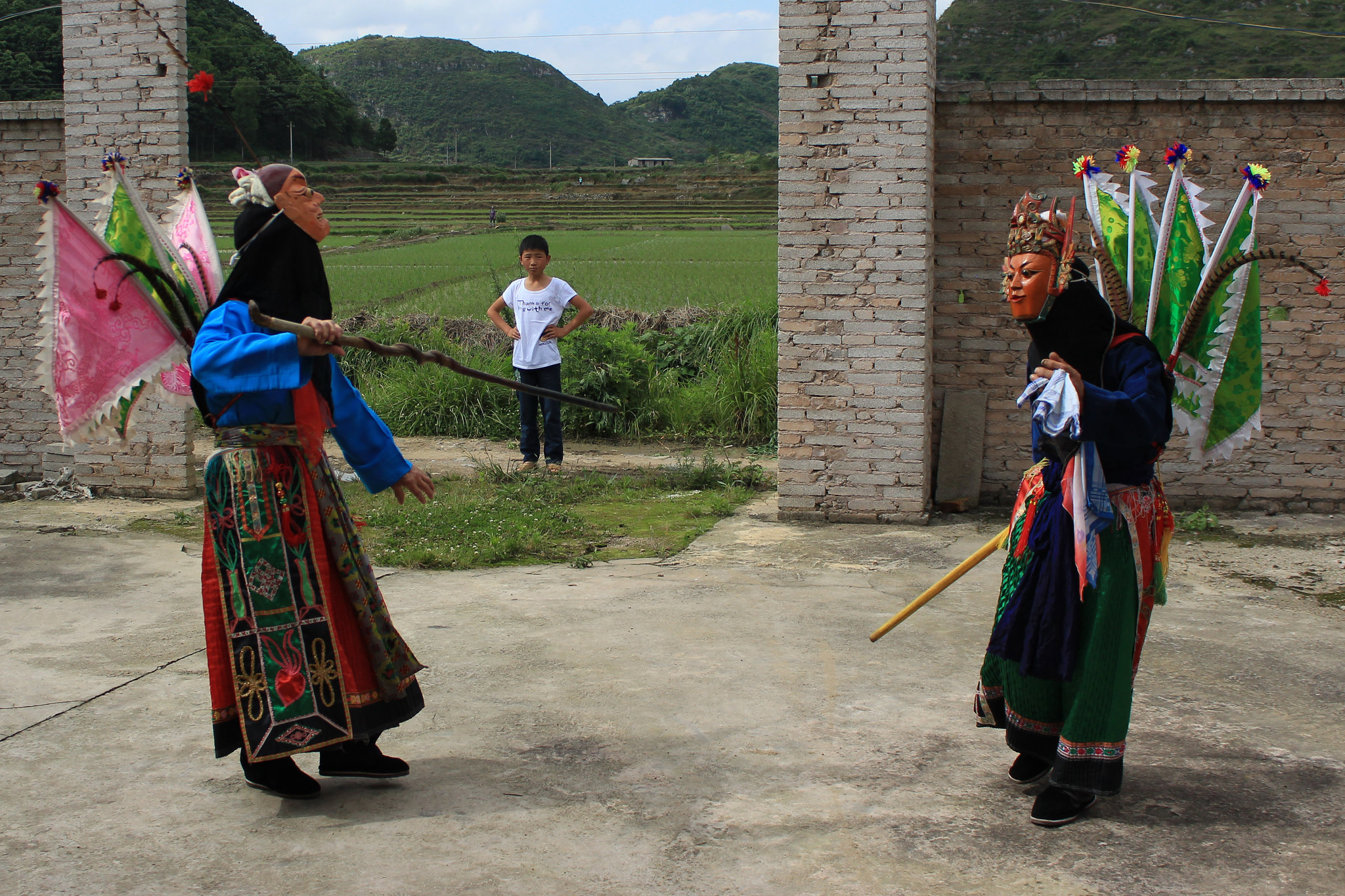 During our final full day in Jichang, the elderly men of the village performed their traditional dance performance for us. A young boy from the village looks on with curiosity. 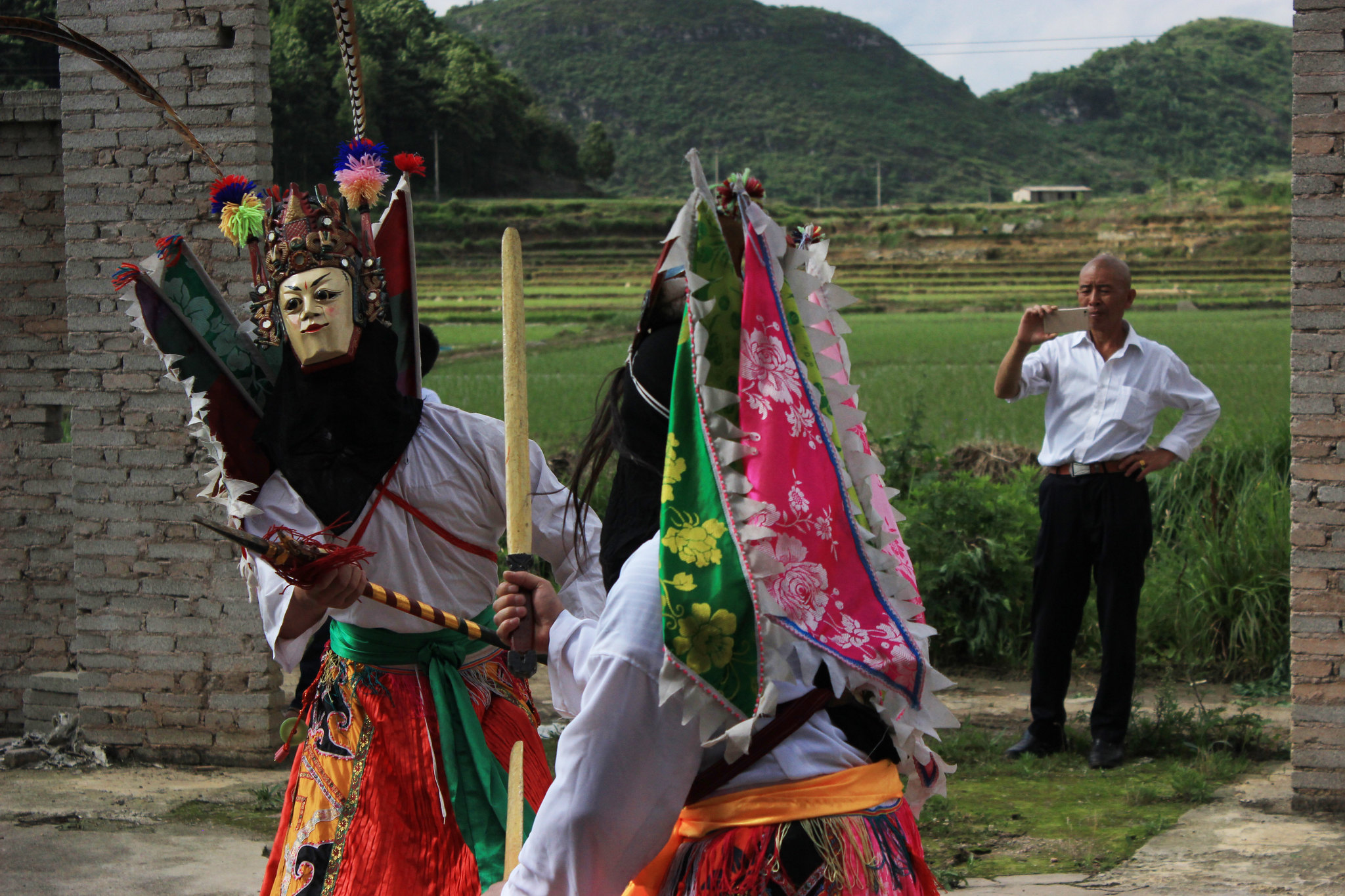 This performance is also part of the villages annual celebration in which all of the prominent families slaughter a pig and parade through the streets. 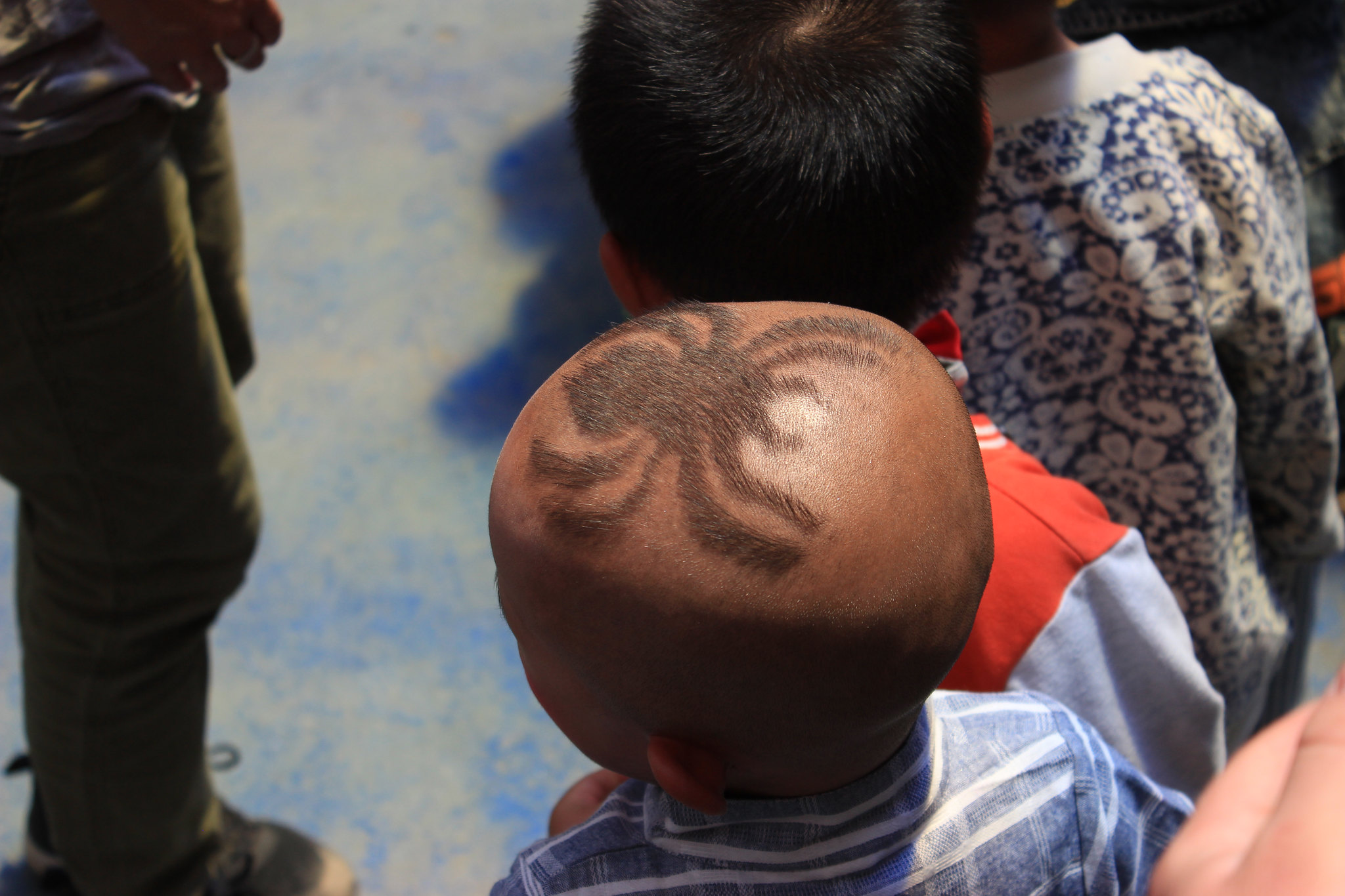 A boy sports a spider shaped haircut on his head at a school in Guizhou Province.

A forge worker makes new plow tips by hand at a forge that has been owned by a single family for generations. 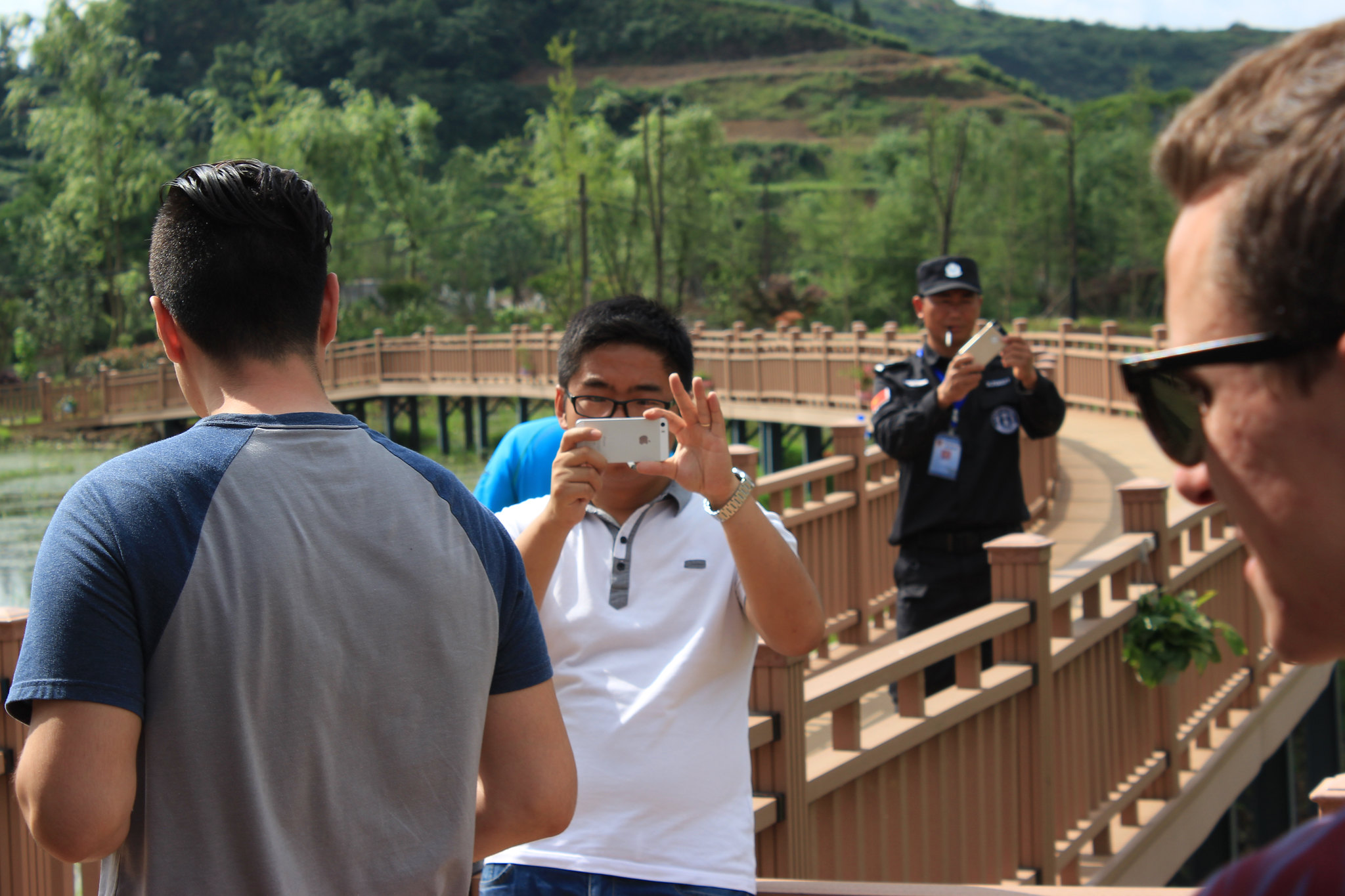 At this former village turned tourist destination, we were once again the subject of many photos and even had to stop a hired cameraman from filming us a we explored the area. 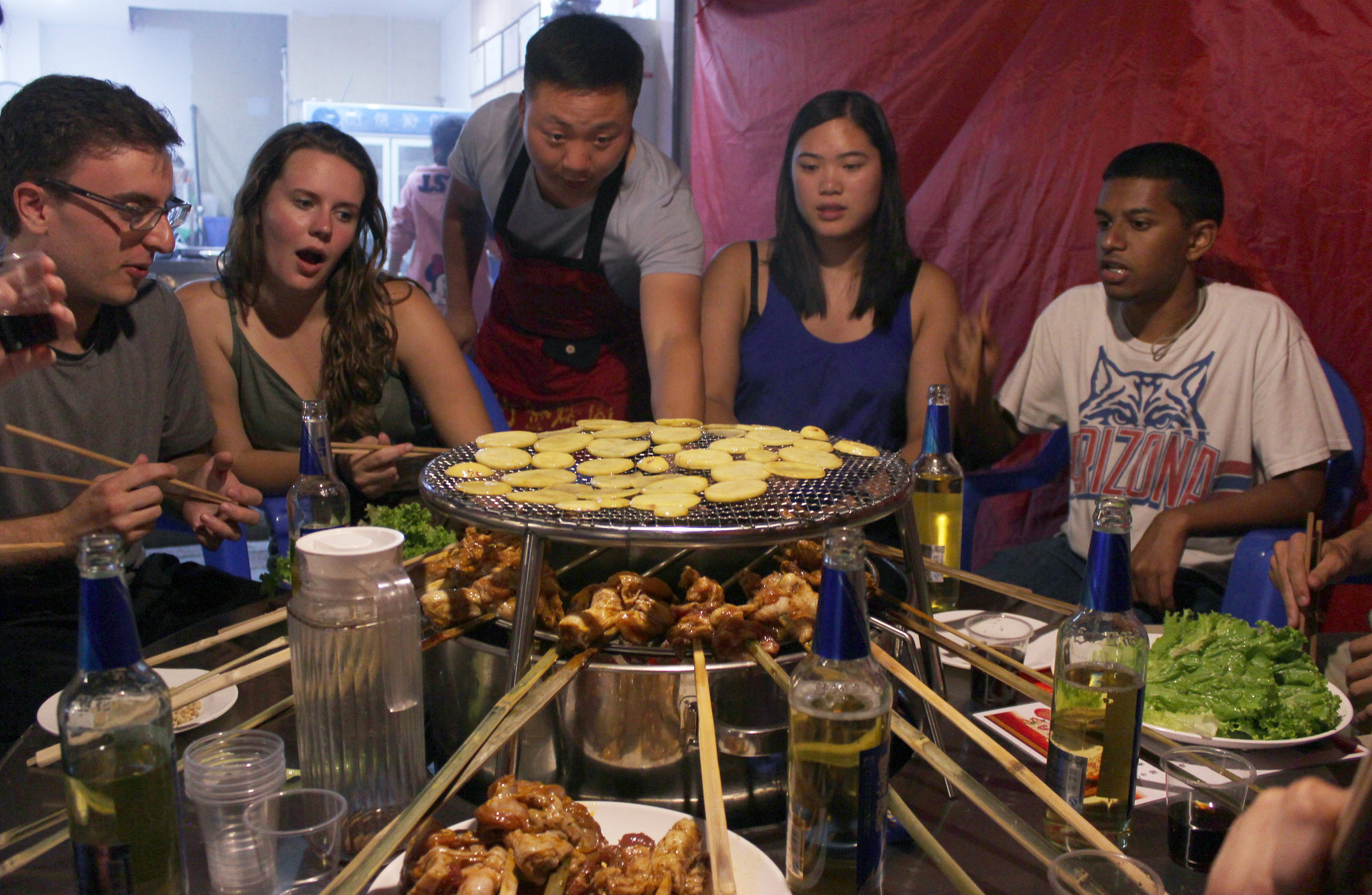 This is one of my favorite people that I met in China. His English name is Bruce. The mandarin word for teacher is lăoshī. We called him Bruce lăoshī because he was an amazing host and teacher at his street grill in Anshun city. Bruce gave one of our friends a Chinese name, made sure we cooked all of our food correctly and even had noodles delivered to the restaurant for us. 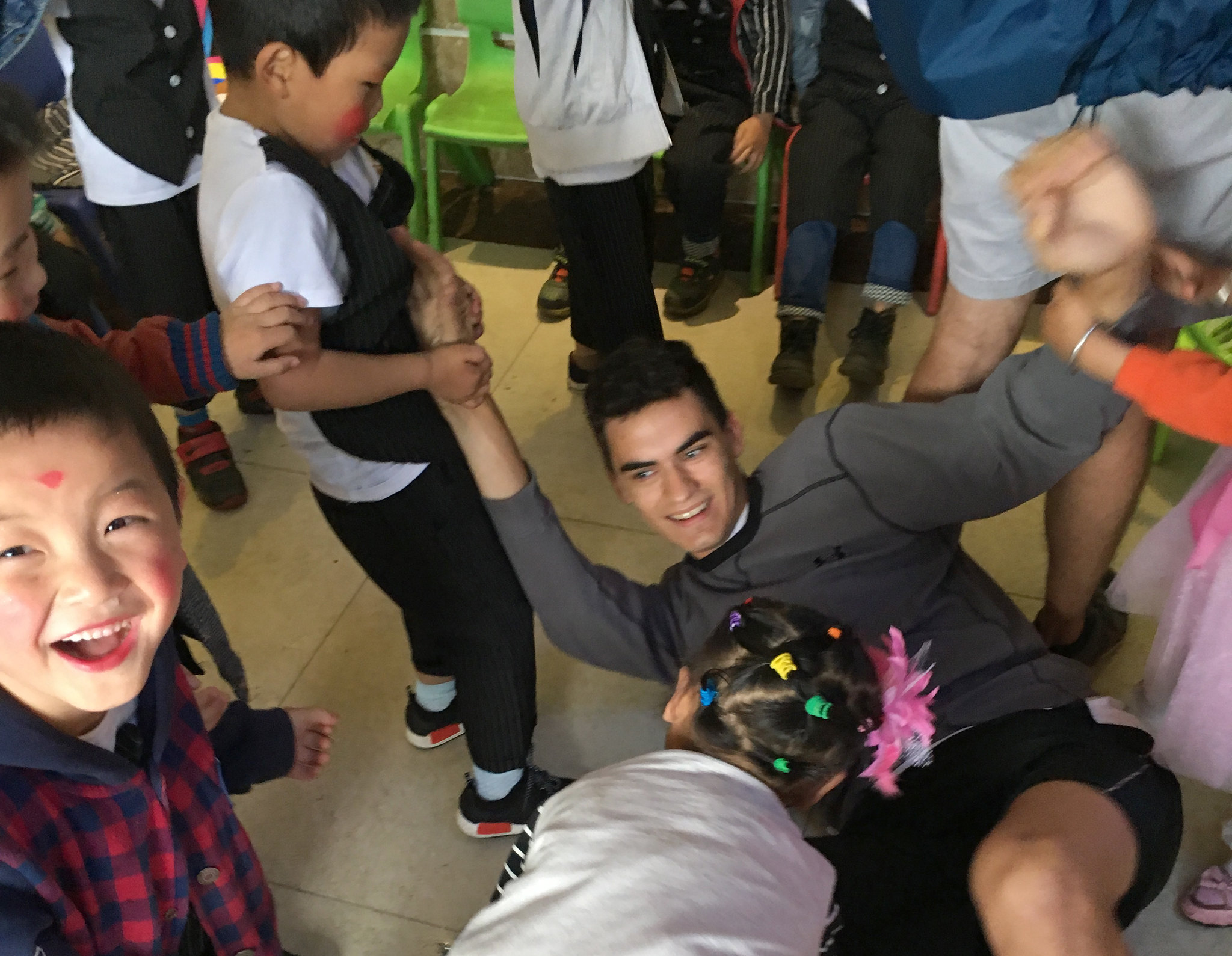 And then there was me!

My group and I’s presence in Beijing and Guizhou province was bound to have an effect on the people there and our interactions with all these people are likely to stick in all of our memories for years to come. Whether it’s the little kid that I taught how to headband or our Chinese grandparents who gave us a home for five days, these was an exchange of culture and emotion that I will never forget.

Thank you for reading!