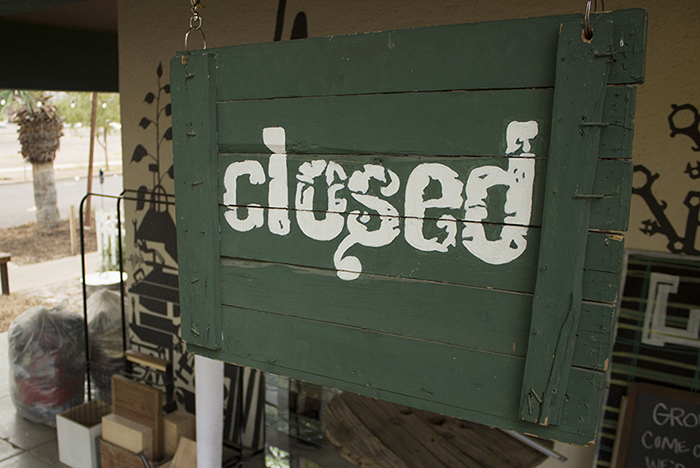 As the Roosevelt Growhouse shuts down operations at its current property, its future is uncertain despite a rich legacy.

The Roosevelt Growhouse closed the doors of its vintage boutique on Sunday. All operations at the community garden will be winding down by the end of the year.

This comes after the property’s new owner, Desert Viking, announced its plan to renovate the space into a restaurant as part of the new Blocks of Roosevelt Row project.

Desert Viking mandated Growhouse owners Kenny Barrett and Josh Hahn to clear out the GROWop Boutique inside the building by Monday night. The outside garden will remain in operation until Dec. 31 while Barrett and Hahn search for a new location in the area.

“We’re just kind of getting escorted out of the building,” Barrett said.

The Growhouse is located on the corner of Sixth and Garfield streets, where tall trees shade the property and rows of plants line the sidewalks around the 1917 bungalow.

A public relations representative from Desert Viking released a statement Monday over email, which said that Desert Viking is excited to “adapt and revitalize the Growhouse gardens into this new chapter of the downtown Phoenix community.”

Growhouse co-owner Josh Hahn said the actions of many new Roosevelt Row developers are at odds with their promise of improving the community that the artists created.

“There’s a really raw piece of Phoenix that’s just being wiped out to be replaced by something just a little bit over-polished,” Hahn said. “The way to preserve the unique flavor of this neighborhood is just to leave it alone.”

Stacey Champion works next door to the Growhouse and shares Hahn’s views about the new developers. Champion is a downtown activist and heads up Champion PR, a public relations and consulting firm.

“If they were really interested in preserving the character of the neighborhood, they should have maybe done some light remolding to the inside and spruced them up a bit,” Champion said. “Not pushed out the people who worked their butts off in the neighborhood to make it what it is.”

Barrett said the Growhouse was preparing to buy the property from its former owner, Angie Pappas, when he learned it had been acquired by Desert Viking. Barrett also said Desert Viking entertained the idea of selling the property to Barrett, but they offered a price that was double what he was prepared to pay.

Barrett said Desert Viking offered to include the Growhouse in its new development in some capacity, but Barrett declined.

“[Their offer] doesn’t show a complete understanding of what we do and it would be logistically difficult to operate our programs in that way.”

However, Barrett said he wants the Growhouse to close on a positive note and he is hopeful the “community driven” project will continue.

“We don’t want to be a sob story and we do think there’s a lot of opportunity,” Barrett said. “We believe that the project will carry forward if everyone believes in it and wants it.”

A community dialogue about the Growhouse potentially acquiring a city owned parcel in the area was one solution suggested by Barrett and Champion.

The Growhouse’s property was barren around the bungalow when Barrett began to transform it into a community garden in 2008. The trees that now sit on the property began as seeds in the ground according to Barrett, who planted them.

Barrett lived in the house from 2008 to 2010 and operated an art gallery in the building to raise money for the garden. Once they could sustain the garden with farmers market sales, Barrett and Hahn then turned the building into a vintage boutique called the GROWop in 2010.

The boutique and garden provided a place for community members to gather on Sunday mornings and tend to the plants.

Carla Logan worked with Barrett since the beginning of the Growhouse. Logan is a member of the Roosevelt Community Development Corporation and also the founder of Carly’s Bistro, a restaurant and bar on Roosevelt Row. She watched the development of the Growhouse through the years and partnered with Barrett, often using some of the produce from the garden in her restaurant.

Logan said she thinks the Growhouse is an important educational asset for the downtown community.

The community momentum behind the Growhouse is what will allow the community garden to resettle within the arts district, according to Barrett. He said he hopes the hard work of volunteers will not go to waste as Desert Viking takes over the property.

“It’s hard not to feel like the community deserves to reap the benefit of all the hard work they’ve put into this space, versus someone from another community coming in and reaping the benefit,” Barrett said.

The Growhouse provides hands-on education for participants, offering public compost bins and garden beds the community can rent out. The Growhouse has also carried out several side projects through the years such as the Valley of the Sunflowers in 2011 and 2012 and the yearly CultivEAT Farm-To-Table Dinner.

“It’s kind of strange how much food the plants produce,” said Josiah Salcedo, a graduate of Bioscience High School and a former Greentern. “You don’t expect it but somehow every week we could come here and harvest enough to feed quite a few people.”

Along with the “Greenterns,” several volunteers like Tricia Apperson tend to the garden each Sunday.

“This is my happy place,” Apperson said. “It’s just a place where you get to get your hands dirty and work with people who are like-minded. It’s not just plants that are going to get uprooted, it’s really the whole program overall and the people that it brings together that is going to have to get back on its feet.”